Inflammatory Language Has Not Ceased and Should Not be Banned by Government; New Car for Harry Reid; We Pay Congressional Interns' College Loans; Termination of Taxpayer Financing of Presidential Campaigns; Former SEIU Attorney Now on Labor Relations Board, Another OBama Radical Appointment 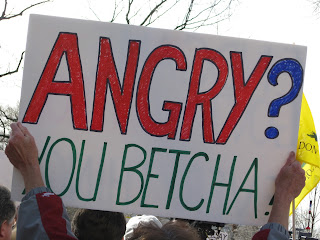 Newsbusters opines: What's with the New York Times and its inability to practice what it preaches when it comes to avoiding gun-filled images and rhetoric?  A few days ago I noted how the Times had placed a bullet-riddled ad for a violent video game right on its online op-ed page.
Now comes this Times headline: "Republicans’ Budget Man Draws Fire".  That is of course a metaphorical invocation of someone who by his actions invites an enemy to shoot at him.  The article's subject was Republican congressman Paul Ryan, the House Budget Committee chairman and budget hawk who will be giving the GOP response to Pres. Obama's SOTU.  To complete the martial metaphor, the article, by Jennifer Steinhauer and David Herszenhorn, also describes Ryan as "the Republican point man" on budget cuts.  A point man is of course the soldier at the lead of a patrol, hence most likely to be shot.

Conservative Outpost writes about those who are decrying "inflammatory" language: They are the same people who had entire organizations dedicated to spreading hate and violence filled rhetoric about George W. Bush and said nothing while supporters publicly fantasized about his assassination. They had no comment about pictures (for sale by Getty Images) of a gun pointing at the head of a Sarah Palin cutout, or
comments among their supporters wishing she were gang raped.

Sen. Reid goes to a local GM dealer in Washington , D.C. with the intention of buying a brand new vehicle. Harry looks around and finds one he likes. After going back and forth with the salesman, Harry settles on a price of $45,000.

Harry and the salesman go back to the office to complete the paperwork. Harry works out a 4-year payment plan, and signs on the bottom line.  The salesman shakes Harry's hand and says, "Thanks Senator Reid, the car will be ready for pickup in 4 years."

Harry says, "What are you talking about?  Where are the keys to my new car?"

The salesman replies, "No, you don't understand Senator. You make payments for 4 years... THEN we give you the car.  You know, just like your health plan".

Harry, with a choking voice, says to the salesman, "But that's not fair".


The resolution to reduce Federal spending and the deficit by terminating taxpayer financing of presidential election campaigns and party conventions has passed the House, 239-160. Find out how your representative voted here: http://clerk.house.gov/evs/2011/roll025.xml

Freedonmist.com writes:In his few months at the National Labor Relations Board [an appointment by our President after Congress refused to approve his appointment], Mr. Becker, former associate general counsel for the Service Employees International Union, has refused to recuse himself from most cases involving his former employer. This despite the fact that Mr. Becker signed the Obama Administration’s vaunted ethics pledge, in which he promised to refrain for two years from participating in “any particular matter involving specific parties that is directly and substantially related to my former employer.”
In true lawyerly fashion, Mr. Becker is now running for the loopholes, arguing that the SEIU proper is a “distinct legal entity” that is different from local SEIU unions. Having liberated himself from that legal barrier, Mr. Becker says he intends to continue judging disputes that feature local SEIU shops. He even convinced the NLRB’s inspector general—who was asked to investigate one of the failure-to-recuse cases—to buy the separate legal entity line. http://freedomist.com/2010/08/19/craig-becker-obama%E2%80%99s-appointed-labor-relations-board-member-refuses-to-recuse-himself-from-seiu-related-cares-obama-watch/