Act. While EPA Administrator Lisa Jackson is trying to calm a political backlash by promising the delay the onslaught of regulations (the overall blueprint is over 18,000 pages and regulates almost everything that moves and lots of things that stay put) she remains committed to them. The Senate will have a key vote on S.J. Res. 26, which would stop the EPA, some time in May.
The FCC was smacked down in court last week in Comcast v. FCC, which held that the Commission has no jurisdiction to regulate the Internet. Yet FCC Chairman Julius Genachowski, a close friend of Obama’s, is now considering Internet regulations of an even more extreme nature and by an even more dubious mechanism—reclassifying the Internet as a phone system to regulate it like an old-fashioned public utility.
Obama has a pattern of sidestepping Congress that will only get worse in the aftermath of the health care fight and the pending financial “reform” legislation. For a full explanation of all of these threats as well as action items on how to stop them, please check out the interactive version of the chart on www.ObamaChart.com.
-----------------------------------------------------------------------------------------------------------
The Hill reports:
If the financial regulation bill that passed the House last year becomes law, President Obama and his Treasury Secretary will acquire the right to take over any financial institution they wish to, provided that, in their sole opinion, it is both "too big to fail" and on the brink of insolvency. The House bill provides for no judicial review and does not require any objective evidence of imminent failure to trigger the takeover provisions.

Once the government takes over such a company, it will acquire the right to replace the entire board of directors, fire the management of the company, wipe out stockholder equity and even sell off divisions of the company.
---------------------------------------------------------------------------------------------
Service Employees International Union President Andrew Stern, (the most frequent visitor to the White House) and one of America's most prominent labor leaders, is set to resign, according to a member of the union's board and another SEIU official.
The SEIU has emerged as a central political player and has grown rapidly under Stern's tenure, and some close to him had expected him to resign during the first term of the president he helped elect, and after the achievement he'd spent years focusing on, widening access to health care. But he's also waged a series of bitter battles inside the labor movement, one of the nastiest of which turned in SEIU's favor with a California court ruling last week. Stern also won a victory when Obama named his union's lawyer, Craig Becker, to the National Labor Relations board over Republican objections in a recess appointment last month.
Stern, even without the union presidency, would remain on, among other things, the board of President Obama's deficit commission, to which he was appointed in February. [It's the "among other things" that concerns me.  I won't be surprised if he turns up as an appointee of the President."  Either that, or we will be told that it doesn't matter what terrible things he has done - he is gone, let's just move forward.]
Stern’s operating philosophy: “[W]e prefer to use the power of persuasion, but if that doesn’t work we use the persuasion of power.”

News Flash -
CEOs had been asked to testify before a U.S. House subcommittee investigating the companies' claims that the new health care bill will affect their ability to provide coverage for its retirees, and will therefore cost the companies millions of dollars.
The Subcommittee on Oversight and Investigations also wanted Caterpillar and other companies to document the claims and explain how they arrived at the amounts they claim the new law will cost them.  Representative Henry Waxman, who called for the grilling of those CEOs,  has called off the testimony.   Someone actually read the legal requirements for companies to actually show their expenses, and found that they were only following the law.  It must be so disappointing to not be able to rail against big companies as evil doers.
Posted by Karen at 7:58 AM No comments:

Obama's Health Care Bill Has Passed - Now We See What's In It! 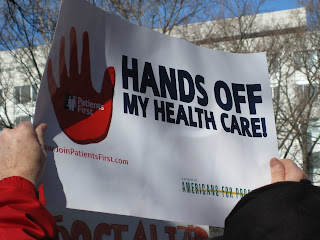 The Washington Examiner writes: Taxpayers earning less than $200,000 a year will pay roughly $3.9 billion more in taxes — in 2019 alone — because of healthcare reform, according to the Joint Committee on Taxation, Congress’ official scorekeeper for legislation.
The new law raises $15.2 billion over 10 years by limiting the medical expense deduction, a provision widely used by taxpayers who either have a serious illness or are older.
Taxpayers can currently deduct medical expenses in excess of 7.5 percent of their adjusted gross income. Starting in 2013, most taxpayers will only be allowed to deducted expenses greater than 10 percent of AGI. Older taxpayers are hit by this threshold increase in 2017.

Three decades later, southerners viewed the “Tariff of Abominations” as Jefferson and Madison had viewed Adams’ legislation. And sharing Jefferson’s view that the federal government was a compact created by the states, and therefore one the states had a right to dismantle should tyranny arise, South Carolina pushed the doctrine of nullification coupled with the threat of secession.
And the demarcation between supporters of a burgeoning government and supporters of states’ rights is as clear (and important) in 2010 as it was in 1828 and 1832. For within days after the passage of Obamacare, Utah, Texas, Virgnia, Alabama, Michigan, Florida, South Carolina, Nebraska, Pennsylvania, Washington, North Dakota, and South Dakota, positioned themselves to file suit against it on grounds that portions of the legislation were unconstitutional: And before the legislation was even signed into law Idaho and Minnesota were taking their stand.

Within weeks, these first fourteen states were joined by six more, and now the National Conference of State Legislatures reports that “members of at least 39 state legislatures have proposed legislation” which, in one way or another, is aimed at stopping Obamacare in its tracks.

In short, the race is on to nullify this legislation before the citizens of the states fall prey to the greedy, overreaching paws of those who put government first, and liberty second. 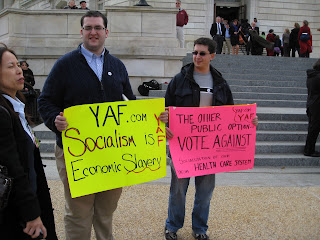 Obama on Tuesday announced the new strategy, including a vow not to use nuclear weapons against countries that do not have them. Iran, however, was pointedly excepted from that pledge, along with North Korea, because Washington accuses them of not cooperating with the international community on nonproliferation standards. "American materialist politicians, whenever they are beaten by logic, immediately resort to their weapons like cowboys," Ahmadinejad said in a speech before a crowd of several thousand in northwestern Iran.


"Mr. Obama, you are a newcomer (to politics). Wait until your sweat dries and get some experience. Be careful not to read just any paper put in front of you or repeat any statement recommended," Ahmadinejad said in the speech, aired live on state TV.


"American materialist politicians, whenever they are beaten by logic, immediately resort to their weapons like cowboys," Ahmadinejad said in a speech before a crowd of several thousand in northwestern Iran.