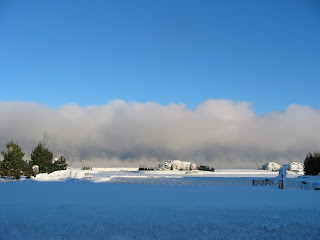 Important stories surround the Stimulus Bill. Days before signing the bill, President Obama invited the public to be informed about where the $787 billion in the bill goes. "Ultimately, this is your money, and you deserve to know where it's going and how it's spent," Mr. Obama said in his weekly radio address. Meanwhile: "Democratic staffers released the final version of the stimulus bill at about 11 p.m. last night (before the vote) after delaying the release for hours to put it into a format which people cannot “search” on their home computers". I guess we just didn't deserve to know it's contents prior to it's passage, breaking the pledge of Nancy Pelosi and Obama to allow the public (much more the Congress!) to have 48hrs. to study it prior to voting on it. Obama has skirted this promise with one simple move: it is yet another EMERGENCY bill.

And from Joan Swirsky of the Canada Free Press, who seems much more willing than American columnists to speak the truth of Obama: "And Obama has done all this (stimulus bill) with the predictable double-speak that characterizes malevolent intention, i.e., touting transparency while concealing everything, speaking of integrity while appointing crooks and incompetents riddled with conflicts-of-interest, supporting energy independence while killing off-shore and domestic oil-drilling and nuclear power, and feigning optimism while he speaks of impending “catastrophe” in order to push through a pork-laden, trillion-dollar-plus Stimulus plan that rewards the corrupt voter-fraud organization Acorn with billions and unions with discriminatory union-only labor agreements, paves the way for socialized medicine, and threatens to take away the most cherished rights of We The People".

Meanwhile: "Democratic staffers released the final version of the stimulus bill at about 11 p.m. the night before the vote, after delaying the release for hours to put it into a format which people cannot “search” on their home computers". So much for transparency....

Speaking to Obama's fearmongering, he is showing his ignorance of history or lack of respect for the truth regarding the current economic crisis, as it doesn't come close to that of the 1930s, as reflected in various ways. U.S. unemployment is now at 7.6%. That rate was 10.8% in 1982 and a whopping 25% in 1932. Our GDP last year actually rose, and is expected to fall by 2% in 2009. In 1930 GDP fell by 9% and in 1932 it fell by 13%. Auto sales may be down now by 25% now, but they were down 90% during the depression. Obama's continual talking-down of our economy for the last two years has not been helpful, and I believe it has probably contributed to the current crisis. Saul Alinsky would be proud to witness one of his Rules For Radicals being used so well: Increase by any means the feelings of insecurity, anxiety and uncertainty in one's enemy - for the ends justifies the means.

Tom Daschle, Obama's flawed pick to give us Socialized Medicine, has said, "The next President should act immediately … If that means attaching a health-care plan to the federal budget, so be it. This issue is too important to be stalled by Senate protocol.” Thus we have the National Coordinator of Health Information Technology, Obama's vehicle to not so gradually commit us to government dictated and provided health care. I am sorry to report that it was President George W. Bush who put this position into place.

Doctors and hospitals that make "meaningful use" of Electronic Health Records by the deadline get bonus payments from Medicare. Those who do not - get diminishing Medicare payments. "The secretary would seek to improve the use of electronic health records and health care quality by requiring more stringent measures of meaningful use over time." This is the Democrats' vehicle for their eventual goal of Socialized Medicine.

Rahm Emanuel, White House chief of staff, has been exposed to be yet another ethically challenged Obama pick, as he has lived rent- free for years in the home of Rep. Rosa De Lauro (D-Conn.) - and didn't feel he needed to disclose the gift as congressional ethics rules mandate.
OOPS! We must now add Senator Burris, Obama's replacement in the Senate, to the list of Democrats who are ethically challenged. He is being investigated for perjury surrounding his testimony regarding his contacts with the disgraced former Illinois Governor Blago and his minions.

In other news, Obama has named 29 year old Shauna Daly to the newly created "White House Counsel Research Director." She holds no law degree and has zero legal training, but she did work for the Obama campaign and her expertise is "opposition research", or digging up dirt on Republicans.

And Rahm Emanuel has begun to coordinate 527 group attacks on Republicans from the White House. According to www.whorunsgov.com, " Obama's supporters, AFSCME and the labor-backed Americans United for Change, are beginning a major advertising blitz aimed at Republicans who oppose the $1 trillion socialist nightmare".

House Energy and Commerce Committee Chairman Henry Waxman is discussing ways to have the FCC put in place a form of the "Fairness Doctrine" by calling it something new and different. He plans to bypass the difficulty of having the Congress involved by making it a new "regulation" of the FCC! He is also discussing how to impose the doctrine on the Internet. "It's all about diversity in media," says a House Energy staffer. This reminds me of:

Hillary Clinton, who said in 1998, talking about the internet's carrying news about her husband and Monica Lewinsky:

"I don't have any clue about what we're going to do legally, regulatorily, technologically -- I don't have a clue. But I do think we always have to keep competing interests in balance. I'm a big pro-balance person. That's why I love the founders -- checks and balances; accountable power. Anytime an individual or an institution or an invention leaps so far out ahead of that balance and throws a system, whatever it might be -- political, economic, technological --out of balance, you've got a problem, because then it can lead to the oppression of people's rights, it can lead to the manipulation of information, it can lead to all kinds of bad outcomes which we have seen historically. So we're going to have to deal with that.'' First of all, the libs seem to have no problem that the Mainstream Media and newspapers which are ALL very liberal. And - WOW! This is great stuff! It sounds to me as if she is talking about the dangers of the current takeover of America by liberals. How about you?

As written by Michelle Malkin, "ACORN, on Feb. 19, will launch a new tactic in fighting foreclosures: civil disobedience. Participants in the ACORN Home Savers campaign nationwide will simply refuse to move out of foreclosed homes, or in some cases, will move back in. ACORN homesteaders intend to squat in their homes until a comprehensive, federal solution for people facing foreclosure is put in place." "ACORN's foot soldiers, funded with your tax dollars, will scream, pound their fists, chain themselves to buildings, padlock the doors and engage in illegal behavior until they get what they want. ACORN offices, funded with your tax dollars, are training teams of "Home Savers" -- described as "people ready and willing to mobilize on short notice to defend the homesteaders against attempts to evict them." Ready, willing and able to mobilize on short notice because they are either unemployed or employed full time as ACORN shakedown artists. They are ready to target at least 20 cities including Detroit and Flint. Look for the show near you. So THIS is what Obama meant by CHANGE, as well as his promise to his old buddies at ACORN to coordinate with them on a regular basis during his administration! Now I get it!