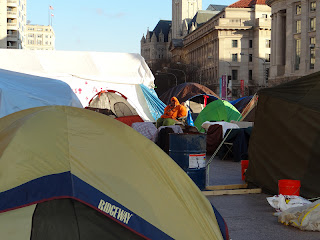 Personal Liberty writes: Radical left-wing activist Bill Ayers apparently stopped by Occupy Union Square in New York City on Friday and shared a little bit of what gets him going each day: Ending capitalism.
“I get up every morning and think, today I’m going to make a difference,” Ayers said in a video clip posted online. “Today I’m going to end capitalism. Today I’m going to make a revolution. I go to bed every night disappointed but I’m back to work tomorrow, and that’s the only way you can do it.”
Over the past few years, we have learned that enemies of America are people who:

“The belly of the airplane has become like a flea market for airport employees. They go in there and go through all the luggage unencumbered, unchecked,” JFK security lawyer Kenneth Mollins said.

[They first edited out of the 911 tapes the fact that the emergency people ASKED him if the man was white, black or Hispanic.  Then they edited OUT of the video the clear evidence of Zimmerman's large gash on the back of his head by putting a graphic over that part of the video.  Not only is our mainstream media lying to us, they are manipulating the news and creating hatred and chaos.  There ought to be a law....and most certainly there will be a whopping lawsuit.] Whoops! Sorry for doctoring those audio and video tapes, folks http://www.humanevents.com/article.php?id=50590

Examiner explains: CRITICAL RACE THEORY - BELL
While most people will not recognize their names, many would recognize their handiwork. Magnus Hirschfeld was a leading homosexual rights activist in Germany in the 1920s. It was Hirschfeld who first coined the attack phrase “racist.” He wrote an entire book in 1930 describing how to use the word “racist” to browbeat political opponents into silence.
Derrick Bell, the first tenured black law professor at the Harvard School of Law, was a student of Critical Theory. In fact Bell devised his own theory called Critical Race Theory. Bell claimed that whites will perpetually oppress black people.
Critical Race Theory:


“Whiteness” is an illegitimate social construct to oppress other people.
“Blackness” is a legitimate social construct to resist oppression.
Black failures is caused by white oppression.
Blacks will continue to fail in life for the foreseeable future and it will be the fault of whites.
The US Constitution does not have the capacity to keep whites from oppressing blacks.
Only a totalitarian Marxist government can correct white oppresion AND/OR
Whites must cease to exist as an identifiable group.

Bell said that he “lives to harass white people.” Bell was a major supporter of Louis Farrakhan. Jeremiah Wright, the man Obama describes as his “mentor,” is also a major Farrakhan backer, as is Michelle Obama. Take for example Kamau Kambon, Ph.D. He is a former professor of African-American studies and the University of North Carolina and the owner of “Blacknificent Books.” He characterizes the world as a “global plantation” and says that all black people around the world are oppressed by whites. In 2006, he was speaking at a forum that was being broadcast live on C-Span. He stated “We have to exterminate white people off the face of the planet to solve this problem.” Rather than receiving any condemnation from the all black audience, many people applauded him.