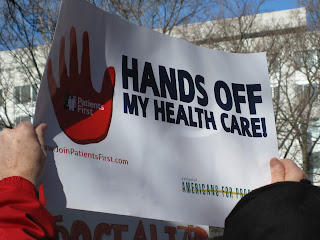 From the debate: You want the Affordable Care Act repealed. Why?

21:56:20: ROMNEY: I sure do.....
And the number of small businesses I've gone to that are saying they're dropping insurance because they can't afford it, the cost of health care is just prohibitive. And -- and we've got to deal with cost.
And, unfortunately, when -- when -- when you look at Obamacare, the Congressional Budget Office has said it will cost $2,500 a year more than traditional insurance. So it's adding to cost. And as a matter of fact, when the president ran for office, he said that, by this year, he would have brought down the cost of insurance for each family by $2,500 a family. Instead, it's gone up by that amount. So it's expensive. Expensive things hurt families. So that's one reason I don't want it.
Second reason, it cuts $716 billion from Medicare to pay for it. I want to put that money back in Medicare for our seniors.
Number three, it puts in place an unelected board that's going to tell people ultimately what kind of treatments they can have. I don't like that idea.
Fourth, there was a survey done of small businesses across the country, said, what's been the effect of Obamacare on your hiring plans? And three-quarters of them said it makes us less likely to hire people. I just don't know how the president could have come into office, facing 23 million people out of work, rising unemployment, an economic crisis at the -- at the kitchen table, and spend his energy and passion for two years fighting for Obamacare instead of fighting for jobs for the American people. It has killed jobs.
And the best course for health care is to do what we did in my state: craft a plan at the state level that fits the needs of the state. And then let's focus on getting the costs down for people, rather than raising it with the $2,500 additional premium.
Right now, the CBO says up to 20 million people will lose their insurance as Obamacare goes into effect next year. And likewise, a study by McKinsey and Company of American businesses said 30 percent of them are anticipating dropping people from coverage.
Mr. President, Mr. President, you're entitled as the president to your own airplane and to your own house, but not to your own facts. All right, I'm not going to cut education funding. I don't have any plan to cut education funding and -- and grants that go to people going to college. I'm planning on (inaudible) to grow. So I'm not planning on making changes there.
But you make a very good point, which is that the place you put your money just makes a pretty clear indication of where your heart is. You put $90 billion into -- into green jobs. And I -- look, I'm all in favor of green energy. $90 billion, that would have -- that would have hired 2 million teachers. $90 billion.
http://www.cnn.com/2012/10/03/politics/debate-transcript/index.html?iid=article_sidebar
-------------------------------------------------------------------------------------------------------------
[We can clearly see that this President has for a long time been willing to lie to our faces in order to gain the support of one of his constituencies - the truth doesn't matter.] In one of the previously unseen segments in that 2007 video the mainstream media insist we had all seen, then Sen. Barack Obama channeled his inner Kanye West before a group of ministers, suggesting that race influenced that federal government’s response to Hurricane Katrina, unlike the Sept. 11 terrorist attacks and Hurricane Andrew. ”Somehow the people down in New Orleans they don’t care about as much,” Obama told the crowd, criticizing the government for not waiving the Stafford Act for New Orleans as it had for the disasters in New York and Florida.
However, the federal government had waived the Stafford Act’s requirement that New Orleans contribute 10 percent toward the cost of reconstruction and cleanup efforts just 10 days before Obama delivered his speech. Not only that — Obama was among 14 senators who voted against the bill. http://twitchy.com/2012/10/03/wheres-your-dollar-sen-obama-voted-against-stafford-waiver-for-new-orleans-two-weeks-before-speech/
------------------------------------------------------------------------------------------------------------

[Scene from our degradation of America]: Artwork made from semen is causing a stir in Grand Rapids, Mich. after the paintings were included in a city-wide art competition — partially funded by tax dollars.
The three paintings were created using slightly more than four ounces of semen infected with HIV, according to the artist — EA Conner.


Everytime you think the administration's failure in Benghazi couldn't get worse, it gets worse. Eli Lake reports that in the six months leading up to the September 11 attack on the US consulate in Benghazi, security was not only not strengthened, it was actually reduced.