Just What is Corruption?

While in the Capitol city last week, I was able to be part of the "stake-out" outside the Committee on House Administration, waiting for nearly 2 hours with all the media to get into the hearing room for the ethics hearing of Representative Charles Wrangel.  I ended up being the only citizen-journalist who got one of the 60 or so chairs in the room, with only about 6 others like myself standing behind.  I heard one person in the media say, "those are the Tea Party people."  I guess anyone could tell by the small size of my camera that I was a visitor.

I had to feel embarrassed and sorry for this 80 year old man when he was the first person other than media who entered the room.  For at least 6-7 minutes he stood in front of the media while they all took dozens of photos of him, cameras flashing and clicking. What theater!

For one and a half hours those on the Ethics Committee as well as the Committee's chief counsel gave prepared remarks, sparing no disdain for the shame he had brought on both himself and the House of Representatives, especially as the head of the most powerful committee, Ways and Means, which enacts the taxation of all Americans.  They also condemned him for accentuating American distrust of the House and all government.

Congressman Charles Wrangel is a decorated Korean War veteran, a man who participated in the March from Selma with Dr. Martin Luther King, and a man who has brought a lot of federal dollars to his constituents.  He said at his Ethics Committee hearing that he "was not corrupt", that he never "sought any personal gain".  He said he was "overzealous in his efforts to raise money for a non-profit college center to be named in his honor". He said, " I have dedicated my life to this Congress and my country and my community." 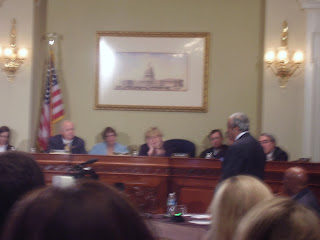 As was pointed out mostly by Rep. Bonner and Chief Counsel Chisam, Rep. Wrangel set himself above those Americans who are kicked out of rent-controlled apartments in NYC which are meant to be used only for residential purposes; those who are forced to pay back taxes along with enormous fines and perhaps imprisonment; those Americans who pay for the Congressional stationery and his official time in office; those companies and people who were perhaps strong-armed many companies into donating many millions of dollars to support the Charles Wrangel Center at NYU at a time that their businesses were before Wrangel's committee; those Wrangel scholarship students who then witness its leader being so unethical; those who are expected to divulge rental income of 17 years and pay taxes on it or go to jail .  His unethical actions, in spite of having a forensic CPA for all those years, does amount to more than just overzealous activity and should result in a Censure. 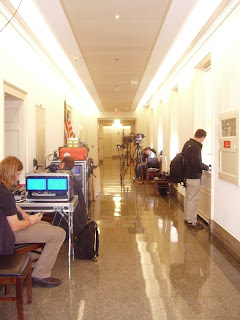 Almost laughably, here are some of his excuses, along with him being such a good guy:
1) I didn't ask to be given a rent-controlled apartment!  THEY asked me to fill the space, so that they would have a tenant!
2) I didn't ask the NYU to build a center with my name on it - THEY asked me! [All well and good.  It was the way he helped it be funded that was inappropriate. Weren't these first two excuses perfect chances for him to say he could not do it because it goes against the ethics rules of the House?]
3) My use of Congressional stationery was just sloppy.  [Not extra incentive for donations?]
4) When asked if he has paid back taxes, or will do so beyond the reach of the Statute of Limitation by the IRS (an extra 10 years), he angrily shouted that he absolutely will not.  [I thought the IRS can only go back 7 years - unless they find FRAUD.]
4) And the most laughable to me - Wrangel said that it was an unfair hearing because he was not allowed to have any friendly witnesses there to testify.  There was no list of the good things he has done. What makes this ridiculous is that his witnesses were in the building and had been sworn in, ready to testify in his favor just three days before.  When Rep. Wrangel decided to stomp out of the hearing because in spite of being investigated for 2 1/2 years and spending $2 million on attorneys, he had only been given the official list of alleged violations just 8 days before, he gave up the right for those witnesses to be heard.  It reminded me of the plea from the two brothers who killed their parents that they be judged with leniency because they are now orphans.  No, I am not saying the Rep. did anything so horrible, just that he alone caused his outcome. 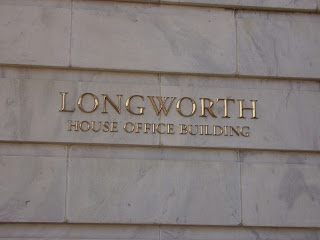 The question is how one defines corruption, I suppose, as well as personal gain.  Breaking ethics rules to gain donations for a major center with his name on it, saving campaign money by illegally having a lower rent apartment, hiding from the House the ownership of a condo in Dominican Republic and then hiding the rental income from that condo for 17 years - those can certainly be called by some to be both corruption as well as personal gain.  What a sad way to manage an important and powerful career.  What a sad note to the trust most Americans had in Congress.
Posted by Karen at 8:56 AM