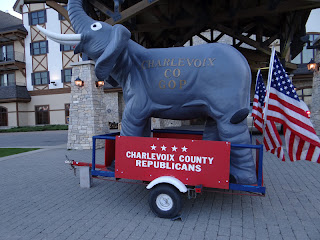 
Barack Obama launched his campaign in unspectacular fashion today at Ohio State University, the largest college in the crucial swing state.  A photo posted to twitter by Mitt Romney's campaign spokesman Ryan Williams reveals sparse attendance.  The above image, according to Williams, was taken during the President's first official campaign speech.  http://www.breitbart.com/Big-Government/2012/05/05/obama-empty-arena

Obama's speech at Ohio State University was the first official one of his reelection campaign. The president said Mitt Romney, the presumptive GOP nominee, would take the country in the wrong direction.
"Ohio, we cannot give him that chance. Not now. Not with so much at stake,” Obama said at Ohio State University, his voice growing louder with every line," Obama said in the speech. "We’ve been through too much to turn back now." http://thehill.com/video/campaign/225599-rnc-hits-obama-in-web-video-saying-country-is-not-better-off


(CNSNews.com) – A report from the House Ways and Means Committee finds that 71 of the nation’s top 100 companies would find it far more economical to drop their health care plans and simply pay the penalty for not complying with the Obamacare employer insurance mandate. [So much for being able to keep our insurance if we like it.  This was the plan all along, moving everyone to government insurance indirectly.] http://weaselzippers.us/2012/05/05/report-71-of-fortune-100-companies-could-drop-employee-health-insurance-under-obamacare/

As James Taranto at The Wall Street Journal theorized, “If 45 of 50 interview subjects didn't mention race, one could just as easily take the position that the glass is 90% full rather than 10% empty.” But Tavernise and the Times felt that even a small amount of what they perceive to be racism could be crucial in a close election.
It’s also ridiculous for the Times to imply through its mining for quotes that the concept that Obama “got the Nobel Prize without deserving it” is racist. Obama felt he won the Nobel Prize without deserving it.

“This weekend, the Michigan Democratic Party will be holding its caucuses to formally nominate Barack Obama as president. What do Democratic caucus voters need to vote? A photo ID.”