Letters written by a 95 year old Pearl Harbor survivor to our President, and from a business owner to his employees 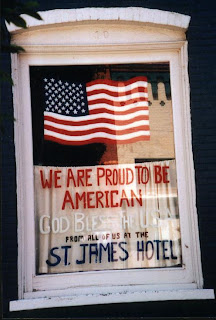 This venerable and much honored WW II vet is well known in Hawaii
for his seventy-plus years of service to patriotic organizations and causes all over the country. A humble man without a political bone in his body, he has never spoken out before about a government official, until now. He dictated this letter to a friend, signed it and mailed it to the president.

My name is Harold Estes, approaching 95 on December 13 of this year. People meeting me for the first time don't believe my age because I remain wrinkle free and pretty much mentally alert.

I enlisted in the U. S. Navy in 1934 and served proudly before, during and after WW II retiring as a Master Chief Bos'n Mate. Now I live in a "rest home" located on the western end of Pearl Harbor , allowing me to keep alive the memories of 23 years of service to my country.

One of the benefits of my age, perhaps the only one, is to speak my mind, blunt and direct even to the head man.

I am amazed, angry and determined not to see my country die before I do, but you seem hell bent not to grant me that wish.

I can't figure out what country you are the president of.
You fly around the world telling our friends and enemies despicable lies like:
" We're no longer a Christian nation"
" America is arrogant" - (Your wife even
announced to the world," America is mean-
spirited. " Please tell her to try preaching
that nonsense to 23 generations of our
war dead buried all over the globe who
died for no other reason than to free a
whole lot of strangers from tyranny and
hopelessness.)
I'd say shame on the both of you, but I don't think you like America, nor do I see an ounce of gratefulness in anything you do, for the obvious gifts this country has given you. To be without shame or gratefulness is a dangerous thing for a man sitting in the White House.

Which ones did you mean? Was it the notion of personal liberty that 11,000 farmers and shopkeepers died for to win independence from the British? Or maybe the ideal that no man should be a slave to another man, that 500,000 men died for in the Civil War? I hope you didn't mean the ideal 470,000 fathers, brothers, husbands, and a lot of fellas I knew personally died for in WWII, because we felt real strongly about not letting any nation push us around, because we stand for freedom.

I don't think you mean the ideal that says equality is better than discrimination. You know the one that a whole lot of white people understood when they helped to get you elected.

Shape up and start acting like an American. If you don't, I'll do what I can to see you get shipped out of that fancy rental on Pennsylvania Avenue . You were elected to lead not to bow, apologize and kiss the hands of murderers and corrupt leaders who still treat their people like slaves.

And just who do you think you are telling the American people not to jump to conclusions and condemn that Muslim major who killed 13 of his fellow soldiers and wounded dozens more. You mean you don't want us to do what you did when that white cop used force to subdue that black college professor in Massachusetts , who was putting up a fight? You don't mind offending the police calling them stupid but you don't want us to offend Muslim fanatics by calling them what they are, terrorists.

One more thing. I realize you never served in the military and never had to defend your country with your life, but you're the Commander-in-Chief now, son. Do your job. When your battle-hardened field General asks you for 40,000 more troops to complete the mission, give them to him. But if you're not in this fight to win, then get out. The life of one American soldier is not worth the best political strategy you're thinking of.

You could be our greatest president because you face the greatest challenge ever presented to any president.
You're not going to restore American greatness by bringing back our bloated economy. That's not our greatest threat. Losing the heart and soul of who we are as Americans is our big fight now.
And I sure as hell don't want to think my president is the enemy in this final battle...

When a 95 year old hero of the "the Greatest Generation" stands up and speaks out like this, I think we owe it to him to send his words to as many Americans as we can. Please pass this along.

As most of you know our company, Westgate Resorts, has continued to succeed in spite of a very dismal economy. There is no question that the economy has changed for the worse and we have not seen any improvement over the past four years. In spite of all of the challenges we have faced, the good news is this: The economy doesn't currently pose a threat to your job. What does threaten your job however, is another 4 years of the same Presidential administration. Of course, as your employer, I can't tell you whom to vote for, and I certainly wouldn't interfere with your right to vote for whomever you choose. In fact, I encourage you to vote for whomever you think will serve your interests the best. [...]

Now, the economy is falling apart and people like me who made all the right decisions and invested in themselves are being forced to bail out all the people who didn't. The people that overspent their paychecks suddenly feel entitled to the same luxuries that I earned and sacrificed 42 years of my life for. Yes, business ownership has its benefits, but the price I've paid is steep and not without wounds. Unfortunately, the costs of running a business have gotten out of control, and let me tell you why: We are being taxed to death and the government thinks we don't pay enough. We pay state taxes, federal taxes, property taxes, sales and use taxes, payroll taxes, workers compensation taxes and unemployment taxes. I even have to hire an entire department to manage all these taxes. The question I have is this: Who is really stimulating the economy? Is it the Government that wants to take money from those who have earned it and give it to those who have not, or is it people like me who built a company out of his garage and directly employs over 7000 people and hosts over 3 million people per year with a great vacation?

Obviously, our present government believes that taking my money is the right economic stimulus for this country. The fact is, if I deducted 50% of your paycheck you'd quit and you wouldn't work here. I mean, why should you? Who wants to get rewarded only 50% of their hard work? Well, that's what happens to me. [...]

Business is at the heart of America and always has been. To restart it, you must stimulate business, not kill it. However, the power brokers in Washington believe redistributing wealth is the essential driver of the American economic engine. Nothing could be further from the truth and this is the type of change they want.
[[ Editors' Note: Black actress Stacey Dash defends Romney after facing racist attacks: ‘I chose him not by the color of his skin but the content of his character’ ]]

So where am I going with all this? It's quite simple. If any new taxes are levied on me, or my company, as our current President plans, I will have no choice but to reduce the size of this company. Rather than grow this company I will be forced to cut back. This means fewer jobs, less benefits and certainly less opportunity for everyone.

So, when you make your decision to vote, ask yourself, which candidate understands the economics of business ownership and who doesn't? Whose policies will endanger your job? Answer those questions and you should know who might be the one capable of protecting and saving your job. While the media wants to tell you to believe the "1 percenters" are bad, I'm telling you they are not. They create most of the jobs. If you lose your job, it won't be at the hands of the "1%"; it will be at the hands of a political hurricane that swept through this country.

You see, I can no longer support a system that penalizes the productive and gives to the unproductive. My motivation to work and to provide jobs will be destroyed, and with it, so will your opportunities. If that happens, you can find me in the Caribbean sitting on the beach, under a palm tree, retired, and with no employees to worry about.

David Siegel
For those unfamiliar with Siegel, he is the founder and CEO of Westgate Resorts, a real estate and timeshare company.