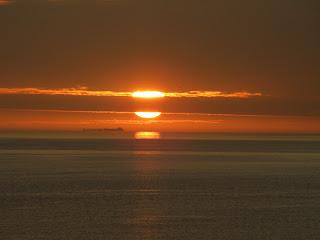 As Mark Steyn notes: None of this should come as a surprise. As Philip Klein pointed out in the American Spectator two years ago, the Obamacare bill contained 700 references to the Secretary "shall," another 200 to the Secretary "may," and 139 to the Secretary "determines." So the Secretary may and shall determine pretty much anything she wants, as the Obamaphile rubes among the Catholic hierarchy are belatedly discovering. His Majesty King Barack "shall have full power and authority to visit, repress, redress, record, order, correct, restrain and amend all such errors, heresies, abuses, offenses, contempts and enormities whatsoever they be." In my latest book, I cite my personal favorite among the epic sweep of Commissar Sebelius' jurisdictional authority:

"Maybe the Founders were wrong to guarantee free exercise of religion in the First Amendment," Melinda Henneberger of the Washington Post offered to Chris Matthews on MSNBC.

The bigger the Big Government, the smaller everything else: First, other pillars of civil society are crowded out of the public space; then, the individual gets crowded out, even in his most private, tooth-level space. President Obama, Commissar Sebelius and many others believe in one-size-fits all national government – uniformity, conformity, supremacy from Maine to Hawaii, for all but favored cronies. It is a doomed experiment – and on the morning after it will take a lot more than a morning-after pill to make it all go away.
| Article Videos

Michigan Capitol Confidential reports:  [It was just a few days ago that I posted the fact that the Michigan Education Association has distributed information on how to use students for propaganda.  Here it is  - in action, the exploitation and indoctrination of our children.] Third through fifth graders at an elementary school in the Walled Lake Consolidated School District were assigned by at least one teacher this week to write letters to Gov. Rick Snyder saying how unhappy they were with his budget cuts, the school district confirmed Thursday.  http://www.michigancapitolconfidential.com/16450

Wired.com writes: Not all the trash arriving at Columbia Ridge has ended up buried. On the southwest side of the landfill, bus-sized containers of gas connect to ribbons of piping, which run into a building that looks like an airplane hangar with a loading dock. Here, dump trucks also offload refuse. This trash, however, is destined for a special kind of treatment—one that could redefine how we think about trash.  In an era when it’s getting more and more confusing to determine where to toss your paper coffee cup—compost? recycle? trash? arrrgh!—and when no one seems to have a viable solution to the problem of humanity’s ever-expanding rubbish pile, this plant represents a step toward radical simplification. It uses plasma gasification, a technology that turns trash into a fuel without producing emissions. In other words: a guilt-free solution to our waste problems. http://www.wired.com/magazine/2012/01/ff_trashblaster/?utm_source=feedburner&utm_medium=feed&utm_campaign=Feed%3A+wired%2Findex+%28Wired%3A+Index+3+%28Top+Stories+2%29%29&utm_content=Google+Feedfetcher
-------------------------------------------------------------------------------------------------------------
Spiegel International asks: Will reduced solar activity counteract global warming in the coming decades? That is what outgoing German electric utility executive Fritz Vahrenholt claims in a new book. In an interview with SPIEGEL, he argues that the official United Nations forecasts on the severity of climate change are overstated and supported by weak science. http://www.spiegel.de/international/world/0,1518,813814,00.html