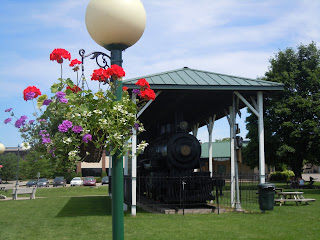 American Thinker opines on Obama: Make no mistake: that's what happened over the past weekend.  We have been through a mercilessly condensed version of a presidential campaign, lasting only hours, in which Barack Obama ran against his own image, demonstrated himself unworthy of office, and threw away any chance of victory in next year's contest. To start with, we have his failure to deal with the budget in due time, thus allowing the crisis to build up in the first place.  Then we have his walking out of the negotiations after he himself tried to pull a fast one (adding $500 billion -- that's a half-trillion, folks -- in taxes at the last minute).  The threats against grandma's checks.  His petulant and adolescent Friday press conference.  His prolonged weekend sulk, leaving the separate houses of Congress to work their way through the crisis with no input from the White House whatsoever.  His wordless rejection of a better deal than he had coming.  The attempt to crash the Asian markets by personal decree.  And finally the speech which was intended to rally the country behind his vision but wound up as a prolonged plea for Congress and the Tea Parties to stop picking on him.
How can this be described as anything else but a complete dereliction of his duty as chief executive of this country?  Put aside all else that has occurred over the past two years; last weekend we saw the utter disintegration of a president.  It cannot be overlooked, and it will not be forgotten.
But times have changed.  People have seen Barack Obama, have taken in his oddities, his narcissism, his ignorance, his lack of quality.  They are unwilling to cut him any more slack.  They know what a president looks like, good or bad, popular or not, and they no longer see a president in Barack Obama.  Is it possible to imagine Reagan, FDR, Truman, or either of the Bushes pulling the kind of tricks that Obama has in recent days? http://www.americanthinker.com/2011/07/obama_seems_to_be_taking_his_defeat_in_the_2012_election_rather_well.html
------------------------------------------------------------------------------------------------------------
The UK Telegraph opines: So what’s going on? Amid all the disputes about tactics and different plans and, inevitably, the politics of every move, Republican seem not to have noticed that they have won the big argument – and reduced President Barack Obama to using his bully pulpit for petulance and blatant electioneering. Even Nancy Pelosi is talking about an “era of austerity”. http://blogs.telegraph.co.uk/news/tobyharnden/100098872/republicans-need-to-do-a-debt-ceiling-deal/
-------------------------------------------------------------------------------------------------------------
UK Daily Mail writes: Islamic extremists have launched a poster campaign across the UK proclaiming areas where Sharia law enforcement zones have been set up.
Communities have been bombarded with the posters, which read: ‘You are entering a Sharia-controlled zone – Islamic rules enforced.’
The bright yellow messages daubed on bus stops and street lamps have already been seen across certain boroughs in London and order that in the ‘zone’ there should be ‘no gambling’, ‘no music or concerts’, ‘no porn or prostitution’, ‘no drugs or smoking’ and ‘no alcohol’.

World Net Daily says that witnesses scheduled to testify at Issa's hearings this week will more than likely name names.

Vanderboegh said it looks like the government itself, from the highest level, was trying to undermine the Constitution.
"They're gradually building a case for a much wider, national conspiracy. By the end of this process, they'll be able to prove that orders came from the very top."