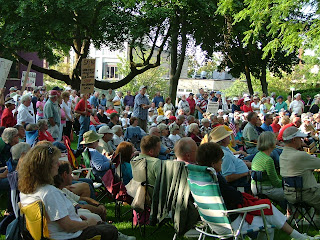 Of course, blackmail and extortion are the well-worn tools of the union movement. Old school union tactics usually meant slashing tires; these new school unionista's know that messing up your credit, boycotting your employer, and reducing your ability to find another job would be just as effective as sending a goon with a baseball bat to break a few windows.
To those who attended the Lincoln Day fundraiser, I might suggest you file a request with the Wisconsin DMV to see who has accessed your car registration file in last few days. I'm sure it would make interesting reading for your family, your lawyer, and your local District Attorney.  http://www.americanthinker.com/blog/2011/03/it_gets_even_uglier_in_wiscons.html
------------------------------------------------------------------------------------------------------------
Politico writes: The liberal group Media Matters has quietly transformed itself in preparation for what its founder, David Brock, described in an interview as an all-out campaign of “guerrilla warfare and sabotage” aimed at the Fox News Channel.

“The strategy that we had had toward Fox was basically a strategy of containment,” said Brock, Media Matters’ chairman and founder and a former conservative journalist, adding that the group’s main aim had been to challenge the factual claims of the channel and to attempt to prevent them from reaching the mainstream media.
The new strategy, he said, is a “war on Fox.”