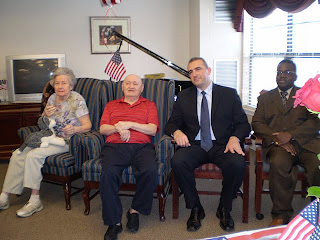 I have a special favor to ask of all of you today.  Please write a note to Johnny Len, 89 years old and recently honored by becoming a US citizen.  Either comment at the end of my blog, write to me at conservative.karen@yahoo.com, or write his daughter at marchfr@gmail.com if you would.  Johnny came here from Poland, enlisted in the US Military, and won several awards for his bravery during WWII.  He spent one night, for instance, just rowing a boat back and forth across a river, delivering fellow soldiers to safety while being fired upon the entire time.  He has been afraid for decades, I've learned, that he would be deported, for he couldn't prove he is a citizen.  After recently visiting the WWII Memorial in DC, and being overwhelmed by the gratitude and standing o's he got there, his daughter finished a 2 year effort to get his citizenship.  She succeeded, and the photo on the left (Johnny in red) was taken on the day he became a US Citizen.  Let's give him our gratitude and appreciation for what he did for America, shall we?  Thank you so much!  The time for telling them is drawing to a close.  If any of you know a WWII vet, I ask if you know there is a program in place to take them to DC, expenses paid, to give them honor?  If you ask, I'll find the info for you.
-------------------------------------------------------------------------------------------------------------

The UK Independent reports: Organisers of a huge protest against the Government's public spending cuts tonight hailed the demonstration a "fantastic success" after hundreds of thousands of people joined the biggest event of its kind for over 20 years.
Between 400,000 and 500,000 teachers, nurses, firefighters, council and NHS workers, other public sector employees, students, pensioners and campaign groups from across the UK marched through central London to a rally where union officials and Labour leader Ed Miliband condemned the "brutal" cuts in jobs and services.   http://www.independent.co.uk/news/uk/home-news/half-a-million-activists-join-anticuts-march-2253791.html
Now for the other side of the story, from the UK Telegraph:
A ragtag army of anarchists, squatters, student militants, environmental activists and radical academics planned the spin-off protests that led to violence during Saturday's march against cuts. Disparate groups had been plotting for months to use the 400,000-strong March for the Alternative as cover for creating mayhem across London, with the stated ambition of shutting down the capital  http://www.telegraph.co.uk/news/politics/8409263/TUC-march-The-militants-behind-the-violence.html
------------------------------------------------------------------------------------------------------------
RedState writes: Today, England’s trade unions and their friends on the Left had a massive demonstration on the streets of London. It devolved into ‘madness‘ as anarchists hijacked the demonstration, breaking in windows, assaulting police, and generally causing mayhem. Union leaders were not displeased.


Trade union leaders, who put on 600 coaches and nine trains to ferry protesters to the capital, insisted they only wanted a ‘safe, well-stewarded and family-friendly event’
But Len McCluskey, leader of the country’s biggest union, ramped up the rhetoric, saying anger towards cuts in public spending ‘needs to find a release’. http://www.redstate.com/laborunionreport/2011/03/26/the-chicken-the-egg-london-unions-school-madison-mobs-on-anarchy/


The UK Telegraph reports: Violent anarchists who rampaged through London during anti-cuts protests are planning to target the royal wedding, police intelligence have suggested. http://www.telegraph.co.uk/news/uknews/royal-wedding/8410157/Anarchists-plan-to-target-royal-wedding.html

Fox News reports from ISLAMABAD:  Pakistan is beefing up its arsenal of nuclear-capable missiles by embracing China as its new strategic arms partner and backing away from the U.S., analysts have told Fox News.  http://www.foxnews.com/world/2011/03/26/switching-sides-pakistan-expands-arms-allegiance-china/?cmpid=cmty_email_Gigya_Pakistan_Switches_Sides%2C_Expanding_Arms_Allegiance_With_China_
and_Leaving_U.S._Behind
------------------------------------------------------------------------------------------------------------
Patriot Update reports: Two years ago, George Soros said he wanted to reorganize the entire global economic system. In two short weeks, he is going to start – and no one seems to have noticed.
On April 8, a group he’s funded with $50 million is holding a major economic conference and Soros’s goal for such an event is to “establish new international rules” and “reform the currency system.” It’s all according to a plan laid out in a Nov. 4, 2009, Soros op-ed calling for “a grand bargain that rearranges the entire financial order.”
The event is bringing together “more than 200 academic, business and government policy thought leaders” to repeat the famed 1944 Bretton Woods gathering that helped create the World Bank and International Monetary Fund. Soros wants a new “multilateral system,” or an economic system where America isn’t so dominant.
The Soros empire is silent about this new Bretton Woods conference because it isn’t just designed to change global economic rules. It also is designed to put America in its place – part of a multilateral world the way Soros wants it. He wrote that the U.S. “could lead a cooperative effort to involve both the developed and the developing world, thereby reestablishing American leadership in an acceptable form.”
That’s what this conference is all about – changing the global economy and the United States to make them “acceptable” to George Soros. http://patriotupdate.com/4640/media-ignoring-plans-by-george-soros-to-remake-the-entire-global-economy
------------------------------------------------------------------------------------------------------------
The UK Daily Mail writes, as reported in the Orlando Sentinel: The White House website proudly says ‘President Obama is committed to creating the most open and accessible administration in American history.’
But try telling Vice President Joe Biden’s staff that, after they held a local reporter in a closet for hours after he was invited to cover a Florida political fundraiser because they did not want him talking with the guests.
But some guests were shocked by the Vice President’s staff.
One emailed the paper saying: ‘I was in attendance at the Fundraiser and enjoyed a nice lunch.
‘If I had known there was a reporter stuffed in the closet, I would have been compelled to stand up and demand answers.
‘I would also like to know if this is actually legal to treat people like caged animals. I’m disgusted by these actions.’
Florida state law says kidnapping entails ‘forcibly, secretly or by threat confining, abducting or imprisoning another person against her or his will and without lawful authority.’  [You can't make this stuff up!]

Beyond the partisanship issue, explicitly declaring that your purpose as a tax-exempt non-profit public foundation is to interfere with the commercial interests of somebody else's legal business enterprise falls nowhere within the scope of purely educational activities.