The Obama administration told the Supreme Court on Monday night it should stay away from a high-profile challenge to the 2010 health care law until after a lower court has had a chance to review the case.
Acting Solicitor General Neal Katyal wrote, “there is no basis for short-circuiting the normal course of appellate review.” Katyal also says Virginia Attorney General Ken Cuccinelli’s case is problematic because he may lack sufficient standing to challenge the health care law.

Team Obama has said they’re absolutely convinced of the health care law’s constitutionality, so with that in mind wouldn’t you think they’d welcome a fast-track opinion on the law and ultimate thumbs-up from the Supreme Court? 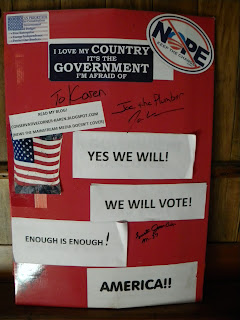 Dennis Prager, a radio talk show host, wrote the following speech articulating the values he would discuss if he were a school principal:
"I am your new principal, and honored to be so. There is no greater calling than to teach young people.
I would like to apprise you of some important changes coming to our school. I am making these changes because I am convinced that most of the ideas that have dominated public education in America have worked against you, against your teachers, and against our country.
First, this school will no longer honor race or ethnicity. I could not care less if your racial makeup is black, brown, red, yellow or white. I could not care less if your origins are African, Latin American, Asian or European, or if your ancestors arrived here on the Mayflower or on slave ships. The only identity I care about, the only one this school will recognize, is your individual identity -- your character, your scholarship, your humanity. And the only national identity this school will care about is American. This is an American public school, and American public schools were created to make better Americans. If you wish to affirm an ethnic, racial or religious identity through school, you will have to go elsewhere. We will end all ethnicity-, race- and non-American nationality-based celebrations. They undermine the motto of America , one of its three central values -- e pluribus unum, "from many, one." And this school will be guided by America 's values. This includes all after-school clubs. I will not authorize clubs that divide students based on any identities. This includes race, language, religion, sexual orientation or whatever else may become in vogue in a society divided by political correctness. Your clubs will be based on interests and passions, not blood, ethnic, racial or other physically defined ties. Those clubs just cultivate narcissism -- an unhealthy preoccupation with the self -- while the purpose of education is to get you to think beyond yourself. So we will have clubs that transport you to the wonders and glories of art, music, astronomy, languages you do not already speak, carpentry and more. If the only extracurricular activities you can imagine being interesting in are those based on ethnic, racial or sexual identity, that means that little outside of yourself really interests you.
Second, I am uninterested in whether English is your native language. My only interest in terms of language is that you leave this school speaking and writing English as fluently as possible. The English language has united America 's citizens for over 200 years, and it will unite us at this school. It is one of the indispensable reasons this country of immigrants has always come to be one country. And if you leave this school without excellent English language skills, I would be remiss in my duty to ensure that you will be prepared to successfully compete in the American job market. We will learn other languages here -- it is deplorable that most Americans only speak English -- but if you want classes taught in your native language rather than in English, this is not your school.
Third, because I regard learning as a sacred endeavor, everything in this school will reflect learning's elevated status. This means, among other things, that you and your teachers will dress accordingly. Many people in our society dress more formally for Hollywood events than for church or school. These people have their priorities backward. Therefore, there will be a formal dress code at this school.
Fourth, no obscene language will be tolerated anywhere on this school's property -- whether in class, in the hallways or at athletic events. If you can't speak without using the f-word, you can't speak. By obscene language I mean the words banned by the Federal Communications Commission, plus epithets such as "Nigger," even when used by one black student to address another black, or "bitch," even when addressed by a girl to a girlfriend. It is my intent that by the time you leave this school, you will be among the few your age to instinctively distinguish between the elevated and the degraded, the holy and the obscene.
Fifth, we will end all self-esteem programs. In this school, self-esteem will be attained in only one way -- the way people attained it until decided otherwise a generation ago -- by earning it. One immediate consequence is that there will be one valedictorian, not eight.
Sixth, and last, I am reorienting the school toward academics and away from politics and propaganda. No more time will be devoted to scaring you about smoking and caffeine, or terrifying you about sexual harassment or global warming. No more semesters will be devoted to condom wearing and teaching you to regard sexual relations as only or primarily a health issue. There will be no more attempts to convince you that you are a victim because you are not white, or not male, or not heterosexual or not Christian. We will have failed if any one of you graduates this school and does not consider him or herself inordinately lucky -- to be alive and to be an American.
Now, please stand and join me in the Pledge of Allegiance to the flag of our country. As many of you do not know the words, your teachers will hand them out to you."
Posted by Karen at 6:08 AM