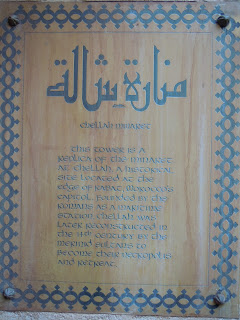 Powerline writes: Four men launched a horrific attack on a teacher in which they slashed his face and left him with a fractured skull because they did not approve of him teaching religion to Muslim girls.
Akmol Hussein, 26, Sheikh Rashid, 27, Azad Hussain, 25, and Simon Alam, 19, attacked [the teacher] with a Stanley knife, an iron rod and a block of cement.

Ynetnews.com writes: Libyan leader Muammar Gaddafi considers the US president a blessing to the Muslim world. In a speech published in London-based al-Hayat newspaper on Saturday, Gaddafi praised Barack Obama, called him a "friend" and said there is no longer any dispute between his country and the US.

Speaking in the Libyan city of Sirt at an event marking the 24th anniversary of an American attack on Libya, he said, "At the time, we were the target of the American cannon, the American navy challenged us in the gulf of Sirt and attacked us all along Libya's shores. America tested Libya, and the Libyan people resisted the large country, but today, thank God, the difference is great."
He said, "Now, ruling America is a black man from our continent, an African from Arab descent, from Muslim descent, and this is something we never imagined – that from Reagan we would get to Barakeh Obama."
Gaddafi stressed that Obama's presidency is "a major historical gain" and said, "He is someone I consider a friend. He knows he is a son of Africa. Regardless of his African belonging, he is of Arab Sudanese descent, or of Muslim descent. He is a man whose policy should be supported, and he should be assisted in implementing it in any way possible, since he is now leaning towards peace."  Despite the warm sentiments towards the American leader, he stressed, "The Arabs hate America, there is no doubt. There is not an Arab that loves America, and even the leaders who the United States considers allies or friends – hate it. The external love is merely hypocrisy or pragmatism. The reason for this is clear – Palestine." http://www.ynetnews.com/articles/0,7340,L-3877174,00.html
-------------------------------------------------------------------------------------------------------------
A recent article in Slate by Robert Bryce describes how Texas has more wind generator capacity than any other state — around 9,700 megawatts. But last August, when state electricity demand set a one-day record of 63,494 megawatts, all those windmills contributed just 500 megawatts, or about 5 percent of their rated capacity.
Apparently, the hottest days in Texas have something in common with those in Michigan —they’re usually not very windy. What’s more, the entity that operates the state’s electricity grid determined that on a year-round basis, all those spinning turbine blades are expected to contribute just 8.7 percent of their rated capacity.
Nevertheless, Texas families are now paying $4 more for electricity every month for a network of power lines connecting those distant rural wind turbines to where most people live.  http://www.michigancapitolconfidential.com/14539
-------------------------------------------------------------------------------------------------------------
Although yesterday Libya was dropped from the Council, according to Canada.com: The UN Human Rights Council is set to adopt a major report hailing Libya's human rights record -- despite moving to suspend the Arab country's council membership amid an international outcry over attacks on civilians.
The report shows countries applauding and commending Libya as they note "with appreciation the country's commitment to upholding human rights on the ground."
Even Canada "welcomed improvements" Libya made "in its respect for human rights," according to the report, which is scheduled for a vote before the Geneva-based 47-member council March 18. But the Canadian government also made several critically framed recommendations to the Gadhafi regime, including one calling for reinforced measures aimed at fully investigating torture claims.

I'm so impressed by this sacrifice that I have decided to do the same thing with my personal budget. I spend about $4,000 a month on groceries, medicine, bills, etc. etc., and now  it's time to get out my budget cutting axe, go line by line through my expenses, and get to work.

I'm going to cut my spending at exactly the same ratio as the President - 1/35,000 of my total budget. After doing the math, it looks like instead of spending $4,000 a month; I'm going to have to cut that number downward by eleven cents!
-------------------------------------------------------------------------------------------------------------
Fox News reports on come of the government waste discovered by the Government Accountability Office [or is it non-accountability?]  The federal government hosts 47 job-training programs, 44 of which overlap. It runs 80 programs for the "transportation disadvantaged."
Another 82 programs spread across 10 separate agencies endeavor to improve teacher quality -- something hundreds of local school districts are already focused on.
Similarly, of the 47 job-training programs run out of the federal government, only five could provide an "impact study" since 2004 looking at "outcomes." About half of them provided no performance review at all since 2004.
The Defense Department takes a number of hits in the report. The GAO found many instances of duplication in the sprawling agency. The use of "urgent need" funds have been expanded, GAO found, with "multiple places for a warfighter to submit" such requests.
GAO found that the Pentagon has "no tracking mechanism" for these funds, resulting in an estimated $77 billion spent since 2005 on communication and computer technologies, counter-measures for improvised explosive devices and intelligence, surveillance and reconnaissance tools. [You will now hear that draconian cuts such as ones made in these programs will cause 700,000 people to lose their jobs.  That would be especially maddening to Democrats because they will lose their Democrat votes as well as the union dues which help get them elected.]
Read more: http://www.foxnews.com/politics/2011/03/01/government-waste-numbers-report-identifies-dozens-duplicative-programs/#ixzz1FRiDy5iV