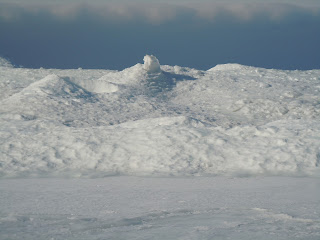 Photo on left: Lake Michigan shoreline in winter
-----------------------------------------------------
The following is quoted from Financial Intelligence Report: The global-warming hysteria is ill-founded.  I am certainly not alone in doubting its validity.  Some 31,000 U.S. scientists have signed a petition urging the US governmmemt not to adopt expensive measures to curtail carbon emissions, as they are not the driving force in climate change, according to Dr. Willie Soon, astrophysicist and geoscientist at the Solar and Stellar Physics Division of the Harvard-Smithsonian Center for Astrophysics, among others.


From the Washington Examiner: Oettinger is the European Union's energy commissioner and, according to Britain's Guardian newspaper, he has dashed hopes of Big Green environmentalists worldwide with these words: "If we go alone to 30 percent, you will only have a faster process of deindustrialisation in Europe. I think we need industry in Europe, we need industry in the U.K., and industry means CO2 emissions." He was referring to proposals that the EU increase its current carbon monoxide emissions reduction goal from 20 percent to 30 percent. Oettinger predicted that what is left of European industry would flee the continent and move to Asia if that happens.

John O'Sullivan writes: Governments, investors and even the World Bank are rushing for the exits in the Great Escape from the green energy bubble.
Solar energy appears to be the worst affected sector so far. Dow Jones reports on a startling U-turn by Britain’s ultra-green government has caught investors off guard and shock waves across the markets will likely precipitate the further rush from green energy projects to shale gas. http://johnosullivan.livejournal.com/30603.html


The LA Times writes:  Ban Ki-moon, the normally buttoned-up Secretary General of the United Nations, swept into Los Angeles during Oscar week playing the role of Hollywood pitchman. His message: Make global warming a hot issue. Animate these stories!" Ban pleaded. "Set them to music! Give them life! Together we can have a blockbuster impact on the world."
If the pitch sounds a tad desperate, it's not surprising. In recent years, public concern over climate change has plummeted in the polls, U.N. efforts to craft a new global climate treaty have been unsuccessful, and Congress has rejected federal legislation to curb greenhouse gas emissions.
The U.N. has long courted such celebrities as Audrey Hepburn, Mia Farrow, George Clooney and Angelina Jolie to be "goodwill ambassadors" for peacekeeping and anti-poverty efforts, but reaching out to writers, directors and producers to incorporate climate change issues in movies, television and social media is new.http://www.latimes.com/news/local/la-me-climate-hollywood-20110227,0,3056165.story