The Muslim Brotherhood in the News; Allah Punishing Jews; the Muslim Brotherhood and Quotes from chairman (in abstenia) of the Michigan-based Islamic American University; Our Anti-Defamation League Writes; Muslims in Europe; AZ Countersues US Government on Immigration Law 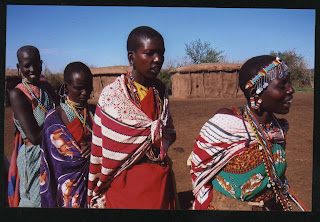 On the left are some handsome women in a Masai Village in Kenya.
----------------------------
Real Clear Politics writes: "The term Muslim Brotherhood is an umbrella term for a variety of movements. In the case of Egypt, a very heterogeneous group, largely secular, [at least internationally, he said] which has eschewed violence and has decried al-Qaeda as a perversion of Islam," Director of National Intelligence James Clapper told a congressional hearing today.

[As we in America struggle with illegal as well as legal immigration, we are just beginning to force ourselves to learn about American mosques, what is being taught there, and what their agendas really are.  Following the problems and solutions in Europe is instructive.  Perhaps we can get ahead of the curve.  Foreign born people in America used to embrace the values of America.  Today they want to segregate themselves and carry on in America as if they were in their home countries.  Would that they would want to be Americans who were born somewhere else instead of a hyphenated American!]  AP News writes: Europe must stamp out intolerance of Western values within its own Muslim communities and far-right groups if it is to defeat the roots of terrorism, British Prime Minister David Cameron said Saturday.
Cameron told the annual Munich Security Conference that European governments have been too tolerant of some sectors of society that publicly oppose democracy or reject equal rights for all.
"We won't defeat terrorism simply by the actions we take outside our borders. Europe needs to wake up to what is happening in our own countries," Cameron told the conference.
In an attack on Britain's previous government, Cameron said authorities there had been too hesitant to intervene when some sectors of society espoused abhorrent views.
We have even tolerated these segregated communities behaving in ways that run counter to our values," Cameron said. "We have encouraged different cultures to live separate lives, apart from each other and the mainstream."
Cameron said a culture of tolerance had allowed both Islamic extremists, and far-right extremists, to build support for their causes. "We've been too cautious, frankly even fearful, to stand up to them," he said.
Some European allies have criticized Britain for harboring hardline Islamic clerics and failing to clamp down on mosques that promote a perverted view of Islam. http://apnews.myway.com/article/20110205/D9L6K1HG0.html
---------------------------------------------------------------------------------------------
Fox News reports: Arizona Gov. Jan Brewer announced Thursday that her state will file a countersuit against the federal government, claiming Washington has failed to enforce immigration law along the southern border.
The governor said the federal government hasn't secured the state's border with Mexico and has stuck Arizona with the costs tied to illegal immigration.
"Because the federal government has failed to protect the citizens of Arizona, I am left with no other choice," Brewer said. [I have heard it said that she really has no chance for this lawsuit to be successful.  However, she would be successful if she sues the Feds for the money her state is expending in doing the job of the Feds.]
Read more: http://www.foxnews.com/politics/2011/02/10/brewer-countersue-federal-government-immigration-enforcement/#ixzz1Das1gjYa
-----------------------------------------------------------------------------------------------------------------------------------
World Net Daily reveals: The push at the state level to ensure no future president enters office under the cloud of suspicion that he or she might not be constitutionally eligible is growing.
At the request of a local tea-party group, Tennessee state Sen. Mae Beavers has filed a bill that would require presidential candidates to show an original birth certificate establishing constitutional eligibility for the office before getting on the ballot beginning in 2012. That makes 11 state legislatures now considering such bills – with several of them well on the way to passage.