The Last of Lessons For Children in US Mosques; Obama Gives Britain's Missile Secrets to Russia!; How to Rid a State of Illegals; Stopping Anchor Babies; "Obama Should Back Off" From Earmarks 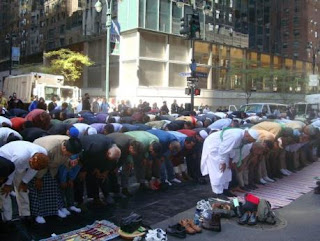 Once a year the Muslim Foundation of America organizes a Muslim Day Parade event that includes a gathering of Muslims at the corner of Madison Ave  and 41st Street in NYC for Zahur prayer.   Photo on left.

How to rid a state of Illegals, as Fox News reports:
In 2007, Missouri placed on the ballot a proposed constitutional
amendment designating English as the official language of Missouri. In
November, 2008, nearly 90% voted in favor! Thus, English became the
official language for ALL governmental activity in Missouri. No
individual has the right to demand government services in a language
OTHER than English.

In 2008, a measure was passed that required the Missouri Highway
Patrol and other law enforcement officials to verify the immigration
status of any person arrested, and inform federal authorities if the
person is found to be in Missouri illegally. Missouri law enforcement
officers receive specific training with respect to enforcement of
federal immigration laws.

In Missouri, illegal immigrants do NOT have access to taxpayers
benefits such as food stamps and health care through Missouri
HealthNET.