My empty chair; A one sentence definition of Obamacare; Israel and God at the DNC; Arab delegates furious; Mitt requests civility; Michelle's viewership at DNC; Be wary of Obama claims; 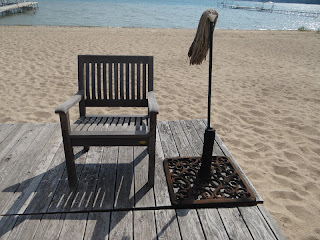 Here is my rendition of "the empty chair" representing Obama, enlarging on Clint Eastwood's "empty chair speech" at the RNC - We shall have to mop up his mess!
This spontaneous movement replacing the typical Labor Day honorees shows a wonderful sense of humor.  Actually, ridicule is one of Saul Alinsky's Rules for Radicals, the playbook of radical leftists, as it angers the target because it belittles him.

Be wary of these 5 claims by Obama

“I’m also going to ask anybody making over $250,000 a year to go back to the tax rates they were paying under Bill Clinton.”
Here, Obama is defending his proposal to boost taxes on the wealthy by noting that the tax rate would be the same as under Clinton. The Bush tax cut set the top rate on income at 35 percent; Obama would restore it to the 39.6 percent rate set during Clinton’s presidency.
But while Social Security taxes are capped, there is no cap on Medicare payroll taxes. Obama does not mention that the health-care law included a 0.9 percent Medicare surtax on incomes over $200,000 for individuals and $250,000 for couples filing joint returns. -
“Nearly 7 million young people have health insurance because they’re able to stay on their parents’ plans.”
Obama has framed this assertion different ways, sometimes more accurately than the quote above.
The Department of Health and Human Services reported in June that more than 3 million young adults would not have health insurance without the health-care law. So how does Obama get to say that nearly 7 million “have insurance” because of the law?
The total number of jobs — private and government — created in the United States from February 2010 until now is 4 million. The job-growth number is still negative if you start counting from the beginning of Obama’s presidency.
According to the Bureau of Labor Statistics, job creation in Obama’s presidency is plus or minus a few hundred thousand jobs, depending on whether you date his presidency from January or February. At this point, Obama is on track to have the worst jobs record of any president since World War II.
http://www.washingtonpost.com/politics/be-wary-of-these-5-claims-by-obama/2012/09/05/91dd831c-f7a2-11e1-8b93-c4f4ab1c8d13_story.html?tid=wp_ipad
-------------------------------------------------------------------------------------------------------------
Posted by Karen at 8:12 AM