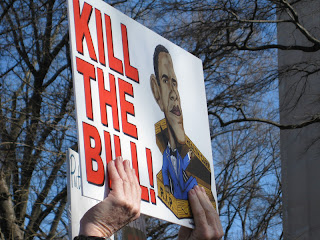 Judge Napolitano opines: The First Amendment to the Constitution prohibits the government from infringing upon the freedom of speech, the freedom of association and the freedom to petition the government for a redress of grievances.
Last week, President Obama signed into law the Federal Restricted Buildings and Grounds Improvement Act of 2011. This law permits Secret Service agents to designate any place they wish as a place where free speech, association and petition of the government are prohibited. And it permits the Secret Service to make these determinations based on the content of speech.
Thus, federal agents whose work is to protect public officials and their friends may prohibit the speech and the gatherings of folks who disagree with those officials or permit the speech and the gatherings of those who would praise them, even though the First Amendment condemns content-based speech discrimination by the government. The new law also provides that anyone who gathers in a "restricted" area may be prosecuted. And because the statute does not require the government to prove intent, a person accidentally in a restricted area can be charged and prosecuted, as well.
[As Judge Napolitano explains, this abridges our rights of association, our right to redress the government for grievances, establishes NO-free-speech-zones, and gives to the Secret Service the power to arrest and bring felony charges to peaceful protesters.  Since the President is given the power to give Secret Service protection to anyone of HIS choosing, such as his campaign manager or his Press Secretary, anyone disagreeing with them is subject to the whims of the Secret Service.]
This abominable legislation enjoyed overwhelming support from both political parties in Congress because the establishment loves power, fears dissent and hates inconvenience, and it doesn't give a damn about the Constitution. It passed the Senate by unanimous consent, and only three members of the House voted against it. And the president signed it in secret. It is more typical of contemporary China than America. It is more George III than George Washington. http://lewrockwell.com/napolitano/napolitano45.1.html

Daily Caller writes: The Obama administration moved forward Friday afternoon in implementing the controversial contraception rule, saying that student health insurance plans must cover preventive services.
After a month of intense debate, the administration finally put the rule in writing Friday and asked the public to comment on the proposed rule for the next 90 days.
People wishing to comment on the rule should visit regulations.gov and follow the instructions under the “More Search Options” tab.
Conservative Catholics pushed back against the contraception rule this week, but the White House indicated that its decision is final, and that Obama has no intention of talking or negotiating with the Catholic bishops challenging the regulation. The administration faces multiple lawsuits, which could reach the Supreme Court.  [Look for more regulations, as the Secretary of Health and Human Services, under Obamacare, has the right to rule in whatever way she deems right - with no authority for Congress to overrule.]

Read more: http://dailycaller.com/2012/03/16/obama-administration-student-plans-must-cover-contraception/#ixzz1pNi7cuK3
-------------------------------------------------------------------------------------------------------------
The Hill reports: Several Senate Democrats up for reelection tell The Hill they haven't ruled out bucking President Obama by voting to repeal the health law's cost-control board.
The House is expected to repeal the Independent Payment Advisory Board next week, putting pressure on the Senate to follow suit. While the bill has broad bipartisan support in the House, no Senate Democrats have so far signed onto repeal legislation despite coming under increasing pressure to do so.
We're looking at it, let's put it that way," said Sen. Joe Machin (D-W.Va.). "We'll weigh the pros and cons" if the bill hits the floor.
Sen. Claire McCaskill (D-Mo.), another conservative Democrat in a tight race, said via a spokesman that she would take a  "hard look" at the proposal if it ever came before the Senate.
Senators are also hearing from a wide array of powerful stakeholder groups, including the American Medical Association and the American Hospital Association, that are lobbying hard to get the board nixed.
The intense lobbying is putting Obama's deficit-cutting efforts at risk. The IPAB is one of the few provisions of the healthcare reform law that has the potential to cut federal healthcare spending, by recommending cuts to Medicare provider payments if costs start to grow too fast. http://thehill.com/blogs/healthwatch/politics-elections/216535-vulnerable-senate-dems-dont-rule-out-voting-against-obama-cost-control-board
-------------------------------------------------------------------------------------------------------------
American Thinker opines: The left wants you to despair.  It is part of their game plan and a partial explanation for why President Obama has been throwing so many awful, intolerable new offensives our way.  From demanding that Catholics pay for abortion services to offering our most critical military secrets to our enemies, his goal is not merely to destroy this country, but to disable our resistance with an overwhelming string of demoralizing offensives.  And just when we start to get a handle on one of them, he initiates another ten.
But despair never won any battle.  Not a single one.  So don't despair.  It is a useless emotion, and a deliberate trap set by your enemies.  Take up the gauntlet and fight on with renewed enthusiasm, because the worm is turning.
There is not a better example of this right now than the state of Maryland.  Not only do endlessly corrupt Governor Martin O'Malley (Obama's Mini-Me) and the state legislature endorse criminality with their Sanctuary policies, but they fund it through the illegal aliens' ACORN, CASA de Maryland, and other similar groups.
To top it off, last December O'Malley signed off on PlanMaryland, an executive order enacting a statewide planning document mandating Agenda 21 "smart" growth policies.  This destructive Plan was publicly opposed by eighteen of Maryland's 23 counties.  Baltimore City was all for it, of course.
Their redistricting efforts angered both Republicans and Democrats.  Their pandering to illegals has infuriated minorities, including legal immigrants, because it is costing them jobs.  Fully 30 percent of DREAM Act repeal petitions were signed by Democrats.

At least that's what gun store owners in the Capital City are saying when they talk about the rising numbers of sales here and across the U.S.