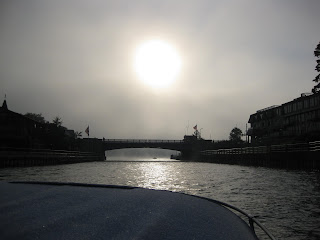 
The Arctic ocean is warming up, icebergs are growing scarcer and in some places the seals are finding the water too hot, according to a report to the Commerce Department yesterday from Consul Ifft, at Bergen, Norway.

Reports from fishermen, seal hunters and explorers, he declared, all point to a radical change in climate conditions and hitherto unheard-of temperatures in the Arctic zone.

If Yogi Berra were here to comment on the hullabaloo over the changes in the arctic today, I’m pretty sure he’d say. “It’s Deja Vu all over again”.  http://wattsupwiththat.com/2008/03/16/you-ask-i-provide-november-2nd-1922-arctic-ocean-getting-warm-seals-vanish-and-icebergs-melt/

(Reuters) - The World Bank will suggest a global levy on jet and shipping fuel in recommendations to G20 governments later this year on raising climate finance, a senior official said on Sunday.


LA Times reports: Scores of protected golden eagles have been dying each year after colliding with the blades of about 5,000 wind turbines along the ridgelines of the Bay Area's Altamont Pass Wind Resource Area, raising troubling questions about the state's push for alternative power sources.

The death count, averaging 67 a year for three decades, worries field biologists because the turbines, which have been providing thousands of homes with emissions-free electricity since the 1980s, lie within a region of rolling grasslands and riparian canyons containing one of the highest densities of nesting golden eagles in the United States.

Fox News reports: The buildings commonly referred to as "green" could actually be hazardous to your health, according to a new report.
That's one of many warnings out of a new report from the Institute of Medicine, which tracked the potential impact of climate change on indoor environments.
The report cautions that climate change can negatively and directly affect indoor air quality in several ways. But the scientists behind the study warn that homeowners and businesses could also be making the problem worse by pursuing untested or risky energy-efficiency upgrades.
Read more: http://www.foxnews.com/politics/2011/06/08/green-buildings-hazardous-to-health-report-cites-risks-weatherization/#ixzz1Oj7YVZTG
Posted by Karen at 7:00 AM