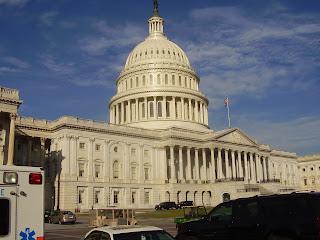 Responding to the request of one of my readers, I hereby report on some of the plans of Democrats in this Congress: look for more tomorrow.
1) According to our President: "If the Republicans have ideas for how to improve our healthcare system, if they want to suggest modifications that would deliver faster, more effective reform ... I am happy to consider some of those ideas," Obama told a news conference at the White House.  [There are two problems with this statement: Obama has been saying this for several years and has done none of it; and he is the one who proudly said we Republicans have to sit in the back of the bus - ok, car.]


a) Fox News reports: After failing to get climate-change legislation through Congress, the Obama administration plans on pushing through its environmental policies through other means.
On Jan. 2, new carbon emissions limits will be put forward as the Environmental Protection Agency prepares regulations that would force companies to get permits to release greenhouse gases under the Clean Air Act.
Critics say the new rules are a backdoor effort to enact the president’s agenda on global warming without the support of Congress, and would hurt the economy and put jobs in jeopardy by forcing companies to pay for expensive new equipment. http://www.foxnews.com/politics/2010/12/28/white-house-plans-push-global-warming-policy-gop-vows-fight/

b)  As David Limbaugh wrote: "Texas, for example, has adamantly refused to roll over for the administration's climate commands, so the EPA is preparing to subsume greenhouse gas permitting authority indefinitely in that little obstreperous state."
c) Also from David Limbaugh: Interior Secretary Ken Salazar has decreed that the Bureau of Land Management will establish new rules to make it more difficult to develop natural resources on government-owned land, which will also drive up the cost of gas and electricity and increase our dependency on foreign energy sources. All these developments serve as a nice complement to Obama's seven-year ban on drilling in the eastern Gulf of Mexico and along the Atlantic and Pacific coasts.[This, as the same time our government loans billion of dollars to Brazil to do offshore drilling of its own.]
d) Front Page Magazine reveals: This Administration is also putting more and more lands into government control. Front Page Magazine wrote:  Have you heard of the “Great Outdoors Initiative”? Chances are, you haven’t. But across the country, White House officials have been meeting quietly with environmental groups to map out government plans for acquiring untold millions of acres of both public and private land. It’s another stealthy power grab through executive order that promises to radically transform the American way of life. The federal government, as the memo boasted, is the nation’s “largest land manager.” It already owns roughly one of every three acres in the United States. This is apparently not enough. At a “listening session” in New Hampshire last week, government bureaucrats trained their sights on millions of private forest land throughout the New England region. Agriculture Secretary Tom Vilsack crusaded for “the need for additional attention to the Land and Water Conservation Fund — and the need to promptly support full funding of that fund.”
Property owners have every reason to be worried. The Land and Water Conservation Fund (LWCF) is a pet project of green radicals, who want the decades-old government slush fund for buying up private lands to be freed from congressional appropriations oversight. It’s paid for primarily with receipts from the government’s offshore oil and gas leases. Both Senate and House Democrats have included $900 million in full LWCF funding, not subject to congressional approval, in their energy/BP oil spill legislative packages. The Democrats have also included a provision in these packages that would require the federal government to take over energy permitting in state waters, which provoked an outcry from Texas state officials, who sent a letter of protest to Capitol Hill last month: http://frontpagemag.com/2010/08/16/obamas-land-deal-power-grab/

3) Lawmakers say Nancy Pelosi is consulting marketing experts about building a stronger Democrat brand. The most prominent is Steven Spielberg, it is rumored, though Spielberg has denied it.  Lawmakers said Spielberg has not reported to Pelosi with a recommendation.

4)  “I think it’s unAmerican.” (to enforce immigration law), said Ms. Pelosi to an Hispanic audience, and refused to clarify the statement when Fox News called her office later on for comment.

5) Politico wrote in late 2010: There has been growing pressure from liberals in Congress for President Barack Obama to be more aggressive in tapping into Wall Street’s wealth to help finance Main Street job-creation programs. Just Thursday, Rep. Peter DeFazio (D-Oregon) and Sen. Tom Harkin (D-Iowa) helped introduce a labor-backed bill that would impose a .25% tax on securities transactions in hopes of raising $150 billion for deficit reduction and jobs related programs including highway transportation projects.
“We need a shift in priorities in this country to ask not what America can do for Wall Street, but ask what Wall Street can do for America,” said Harkin,

Business lobbies are watching with growing alarm. Pelosi, like Brown, has argued that any such fee must be imposed on transactions around the globe in order to protect the competitiveness of major exchanges such as those in New York and London.

“I believe the transaction tax still has a great deal of merit,” Pelosi said, and if agreement can be reached among the G-20 nations, “It is really a source of revenue that has really minimal impact on the transaction but a tremendous impact on helping us meet our needs. http://www.politico.com/news/stories/1209/30200.html

6) The Huffington Post wrote: Senate Democrats will make a dramatic effort to reform the rules of the chamber when the next Congress begins, one of the body's primary filibuster-reform advocates said Wednesday morning.
Sen. Tom Harkin (D-Iowa), who has championed a weakening of the procedural mechanism that allows the minority party to hold up legislation, predicted "fireworks" on Jan. 5, 2011 -- the day on which the Senate can, he argued, revamp its rules by a simple majority vote.
"[Former Sen.] Robert Byrd in 1975, the last time that we changed the rules and [brought the filibuster threshold] from 67 [votes] down to 60, actually stated on the floor that a majority, 51 senators, could change the rules. And that's what we intend to do and that is what we are working on right now. We are coming on the fifth to basically send a motion to the vice president ... that will change the rules and there is a procedure to provide 51 votes to do that. Robert Byrd said that in 1975 and that's what we are going to try to do."
Essentially, that path to reform requires Vice President Joe Biden -- who supports weakening the filibuster -- to rule on the first day of the next session that the Senate has the authority to write its own rules. Republicans, presumably, would immediately move to object, but Democrats could then move to table the objection, setting up a key up-or-down vote. If 50 Democrats voted to table the objection, the Senate would then move to a vote on a new set of rules, which could be approved by a simple majority. http://www.huffingtonpost.com/2010/12/15/tom-harkin-filibuster-reform-fireworks_n_797019.html
Posted by Karen at 8:50 AM