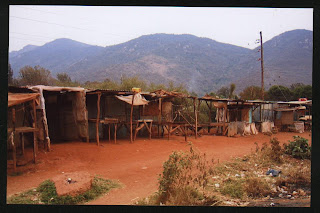 7) Fox News writes: Under the guise of a "referendum" (set for 9 January 2011) that will be observed by a 110-person European Union team of imperial busybodies, Sudan's primarily Christian south will be severed from the Sudanese nation-state, setting the stage for a continuation of the decades old Muslim-Christian Sudanese civil war. The difference will be that henceforth - as is occurring in Somalia - the U.S. and the West will be obliged to protect the new nation they created by theft and oil lust with diplomacy, funding, arms, military training, and eventually troops.
And what is America's interest in becoming involved to the hilt and inextricably in Sudan? What is so vital to the United States in Sudan that President Obama is pressing the leaders of Chad, Egypt, Ethiopia, Kenya, Nigeria, Rwanda, South Africa, and the other states of the African Union to support "our intense interest in having a successful referendum" - read that as "our intense interest in carving up Sudan to suit our imperial purposes and corner access to Sudanese oil." (As an aside, one must admit Rudyard Obama is nothing if not an aggressive proponent of improving - that is, "Westernizing" - the lives of "our little brown brothers," although the blatant theft of Islamic land is a rather odd component for the kinder and more gentle "Muslim outreach program" Obama announced in Cairo and Jakarta.)
The answer is that Obama, our bipartisan political elite, the mainstream media, and the rich, immature, libertine, and anti-U.S. Hollywood set lead by Clooney, et al, want to feel good about themselves by doing "good" for foreigners. For these elite U.S. citizens-of-the-world, ordinary Americans and their kids can starve, freeze, live on the streets, fail to find work, and remain illiterate forever. In essence, they can rot while Washington spends their taxes on Darfur - a place where absolutely no genuine U.S. interest is at stake.
Read more: http://nation.foxnews.com/culture/2011/01/03/clooney-falling-bin-laden-s-sudan-trap#ixzz1A0oi9RFf
8) National Review reports: The Justice Department’s Civil Rights Division has no time to pursue voter-intimidation cases against black defendants. But it has plenty of time to pursue local school boards that make common-sense decisions about student dress codes and accommodations for teachers’ religious practices.
The contrast between what the division does and doesn’t regard as important reveals a radical ideology on the loose — and the willingness of this administration’s political appointees to abuse the civil-rights laws they are supposed to enforce. http://www.nationalreview.com/articles/255994/civil-rights-gone-wild-hans-von-spakovsky


9) Breitbart reveals: The Obama administration says 13 companies whose deepwater drilling activities were suspended last year may be able to resume drilling without detailed environmental reviews. Companies will be allowed to resume work at previously drilled wells, as long as they meet new policies and regulations. http://www.breitbart.com/article.php?id=D9KH2DOG0&show_article=1

10) The NYT writes:  legal advisers, confronting the prospect of new restrictions on the transfer of Guantánamo detainees, are debating whether to recommend that he issue a signing statement asserting that his executive powers would allow him to bypass the restrictions, according to several officials.
One provision bars the military from using its funds to transfer detainees to the United States, making it harder to prosecute them in federal court. Another prohibits the transfer of detainees to any other country unless the defense secretary, Robert M. Gates, certifies that the country has met a strict set of security conditions.
The deliberations over whether Mr. Obama should challenge those provisions were reported Monday by ProPublica, an investigative journalism site, and were confirmed by several officials familiar with the discussions.
Before the vote on the bill last month, Attorney General Eric H. Holder Jr. told Congress that the restrictions would be “an extreme and risky encroachment on the authority of the executive branch.” But lawmakers included them in the final legislation anyway, and Mr. Obama is considered unlikely to veto the measure because it authorizes billions of dollars for the wars in Afghanistan and Iraq. http://www.nytimes.com/2011/01/04/us/politics/04gitmo.html?_r=1


12) From Congress.org: Democrat Jim Webb sent a letter to Barack Obama saying: In a further indication that the "North American Union" agenda is quietly proceeding under what remains of the Security and Prosperity Partnership initiative in the Obama administration, DHS Secretary Janet Napolitano signed an agreement in Mexico with little fanfare that would extend special "trusted traveler" access to the U.S. to an estimated 84 MILLION MEXICANS.

"In Mexico City, Secretary Napolitano and Mexican Ministry of the Interior Secretary José Francisco Blake Mora signed an agreement expressing their intent to develop a Global Entry international trusted traveler pilot program between the United States and Mexico - leveraging the success of the United States' Global Entry program to facilitate secure, legitimate travel between the two nations," announced a DHS statement Nov. 30.
Under the SPP, the U.S., Mexico and Canada organized some 20 different "shadow government" bureaucratic working groups composed of agency heads and undersecretaries in the three nations. The groups spanned a wide range of policy areas, from e-commerce, to aviation policy, to borders and immigration, trilateral travel, transportation, energy, environment, food and agriculture, health and financial services.
Frequently reported, beginning in 2006, that the SPP was intended to implement a stealth plan to produce a North American Union composed of the United States, Mexico and Canada.

13) President Barack Obama named veteran political manager William Daley to be his new chief of staff Thursday, selecting a centrist with Wall Street ties to help navigate a newly divided Congress and a looming re-election. [Don't forget that William Daley, was Al Gore's Campaign Manager in 2000 and initiated 90% of the re-count strategy that occurred in Florida. He is the son of Richard Daley, ex-Mayor of Chicago, and brother of Richard Daley Junior, present Mayor of Chicago.   Rahm Emmanuel will probably inherit that job. Does this put a different perspective on the appointment? By setting Rahm Emanuel and Press Secretary Robert Gibbs free from White House work, they are now able to run Obama's reelection campaign.  So this looks to be all about helping Obama get re-elected, and about having yet another man experienced with rough-and-tumble Chicago politics in charge at the White House.]
http://news.yahoo.com/s/ap/20110106/ap_on_re_us/us_white_house_shakeup

Addendum to yesterday: Asked last weekend in a televised interview how he planned to stop U.S. EPA regulation of carbon -- rules he says have the potential to inflict serious harm on the economy -- House Energy and Commerce Chairman Fred Upton mentioned only one specific strategy: using the Congressional Review Act. [There is a major problem with this plan.  This must be done within 60 Legislature days of the regulation, and that time period is over... It is easy to believe that this was one well thought out plan of the Dems, to do it so that the time would expire before the new Congress was seated - a farewell gift.]

“The accumulation of all powers, legislative, executive, and judiciary, in the same hands…may justly be pronounced the very definition of tyranny” — James Madison, The Federalist Papers, #47.
Read more: http://www.propublica.org/article/administration-prepares-to-defy-efforts-to-limit-obamas-options-for-guantan#ixzz1A0o1nSW5
Posted by Karen at 8:47 AM