These photos are from my trip to Kenya two months before the presidential election of 2007 which was contested by Raila Odinga [alleged cousin of Barack Obama], leading to many deaths.  The poverty was unbelievable, something which America's poor cannot envision.  I remain grateful to have made it back to the USA. 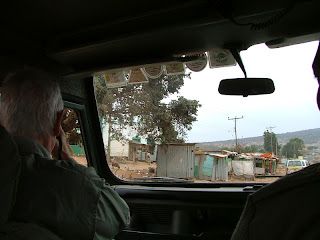 
Obama Campaign Quietly Ditches Faux Flag [not because he was called out for his arrogance and disrespect to the flag of the United States of America.]

This week, Breitbart News offered a $100,000 reward to anyone who produced the infamous 2003 tapes of Barack Obama at an event honoring Palestinian anti-Israel radical Rashid Khalidi. http://www.breitbart.com/Big-Journalism/2012/09/21/LA-Times-Fights-Back-Against-Breitbart-News-Offer-Khalidi-Video


Legal Foundation Seeks End to Forced Unionization of Home-Based Caregivers — State agency asked to award $3 million back to workers that the SEIU took as dues
www.MICapCon.com .

Please note the source of this article - The Washington Times: Mike Zullo, the lead investigator in Arizona Sheriff Joe Arpaio’s investigation of Barack Obama’s eligibility to be president, says he has returned from a second trip to Hawaii with additional evidence the state’s Department of Health is maintaining a cover-up of Obama’s 1961 birth records. ...

In Honolulu, Zullo worked closely with local contacts, including Duncan Sunahara, the brother of Virginia Sunahara, an infant child born in Hawaii Aug. 4, 1961, the same day Obama was born, and died the next day.
As WND reported, Virginia Sunahara entered as a figure in the Obama birth controversy because no birth certificate for her had been located, leading to speculation her birth certificate could have been the source of Obama’s.


“Today’s announcement ensures American sovereignty will not be eroded by last-minute negotiations involving lame-duck Senators.  We applaud the 36 Senators for promising to avoid past lame-duck mistakes and urge their colleagues to make a similar pledge.”


President Barack Obama is about to release or transfer 55 Gitmo prisoners, despite reports that the Libyan believed to be behind the killing of US Ambassador Christopher Stevens was a former Guantanamo inmate transferred to Libyan custody.

The large percentage of those scheduled to be released are Yemeni, according to a list made public by the Obama administration.
Obama stopped the release or transfer of Yemeni inmates in 2010, because the conditions in the country were viewed as too "unsettled" at the time. [And the conditions there are SO much better now, right?] http://www.breitbart.com/Big-Peace/2012/09/22/Obama-to-Release-One-Third-of-Gitmo-Inmates
------------------------------------------------------------------------------------------------------------
Romney has five basic proposals for fixing the American economy that are sensible, practical, and believable.
We are talking about a lot of wealth.  Thanks to fracking, America could be producing more oil and natural gas energy on a daily basis than current U.S. imports from Saudi Arabia, Iraq, Kuwait, Venezuela, Colombia, Algeria, Nigeria, and Russia combined.  The United States' combined recoverable natural gas, oil, and coal endowment is the largest on Earth.
The impact of cheap energy boosts jobs in expanding circles.  Men with high school diplomas pull down $100,000 salaries in the oil and gas fields.  Next circle out: cheap natural gas has revived our steel industry, making American steel production globally competitive again.  Same for plastics and the chemical industry.  Healthy industries mean healthy towns, money for taxes, a sustainable social safety net.  A healthy country.
Excellent working-class jobs, cheap gas, lower consumer prices so the money in your paycheck goes much farther.  Using our energy resources is a huge win for every family and entirely, easily doable.
Energy alone is a reason to vote Republican.  Our economy will not survive if starved of affordable energy.