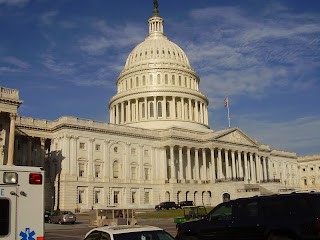 *The great Thomas Sowell writes about Executive Orders: For example, the merits or demerits of President Obama's recent executive order, suspending legal liability for young people who are here illegally, presumably as a result of being brought here as children by their parents, can be debated pro and con. But such a debate overlooks the much more fundamental undermining of the whole American system of constitutional government.
The separation of powers into legislative, executive and judicial branches of government is at the heart of the Constitution of the United States — and the Constitution is at the heart of freedom for Americans.
No president of the United States is authorized to repeal parts of legislation passed by Congress. He may veto the whole legislation, but then Congress can override his veto if they have enough votes. Nevertheless, every president takes an oath to faithfully execute the laws that have been passed and sustained — not just the ones he happens to agree with.
If laws passed by the elected representatives of the people can be simply over-ruled unilaterally by whoever is in the White House, then we are no longer a free people, choosing what laws we want to live under. http://news.investors.com/article/622823/201208201809/president-obama-ignores-constitution-rules-executive-order.htm
------------------------------------------------------------------------------------------------------------
Soros-funded marxists to occupy the RNC: Republican delegates arriving in Tampa for the convention this week will likely find one thing more oppressive than the humidity: hordes of motley Occupiers, political puppeteers, Teamsters, Code Pink activists dressed as giant female body parts, open-borders extremists, vegan Marxists, and tattooed anarchists, all assembling for their quadrennial temper tantrum.
One major target is the Republican presidential nominee, Mitt Romney, and anything ever associated with him. Plans include a tent city called “Romneyville” and protests against any companies assisted by Romney’s old firm, Bain Capital.


Blood Of Afghan Betrayal On Obama's Hands It's now clear why so many U.S. troops have fallen prey to Afghan insider attacks: The administration disarmed them while arming their Afghan trainees, making them sitting ducks.