It takes a lot of nerve to ask for a 30 percent pay raise. You’d better be sure you had a banner year. Yet in Chicago, where just 15 percent of fourth graders are proficient in reading (and just 56 percent of students graduate), the teachers union is set to strike if the district does not agree to a 30 percent increase in teachers’ salaries.  [Do you see the problem?  Me, too.]  http://directorblue.blogspot.com/2012/06/good-times-chicago-teachers-union.html 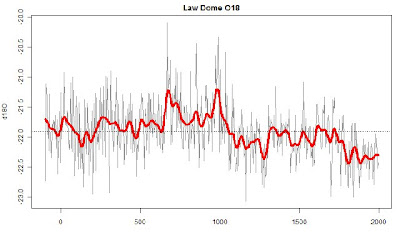 In short, this (Law Dome) data series is one of the best historical models possible, as it represents a consistent temperature record over the timespan of thousands of years. And it highlights the United Nations' cover-up of the inconvenient truth, motivated by greed in the form of grant money, carbon-trading land grabs, and coverage by a subservient left-wing media.


A Climategate email shows that Phil Jones asked about the omission of the Law Dome series from the IPCC illustration in the AR4 First Draft. I asked the same question about the AR4 Second Draft. They realized that the Law Dome graphic had an elevated medieval period and thus, including it in the graphic would – to borrow a phrase from the preparation of AR3 – would “dilute the message” and perhaps provide “fodder to skeptics”.

A document released by the Congressional Research Service, shows that a staggering 78 percent of the $995 billion of the bill's budget authority over 10 years is dedicated to food stamps and nutrition program spending.

Only about $223 billion, 22 percent of the bill actually funds agriculture programs such as crop insurance, farm commodity supports, and conservation programs.

Sen. Jim Demint denounced the cost of the bill yesterday on the Senate floor, adding that since 2000, food stamp spending has increased 400 percent.- http://campaign2012.washingtonexaminer.com/blogs/beltway-confidential/farm-bill-or-food-stamp-bill/596381

“This is a dangerous, radical administration,” said McConnell.

Prior to President Barack Obama’s marathon 54 minute speech in Ohio today, the Obama campaign sent our several statements promising the speech would be a major address framing the campaign going forward. Despite the hype, the speech was mainly a rehash of themes and ideas from the president’s recent stump speeches and his remarks were widely panned as overly long by the political press corps. ...
Before the speech was over, Politico’s Mike O’Brien begged the president to stop.
On the air, MSNBC’s Jonathan Alter said it was “one of the worst speeches I’ve ever heard Barack Obama make.” He refused to back down. http://www.breitbart.com/Big-Journalism/2012/06/14/Media-Give-Obama-Speech-Thumbs-Down