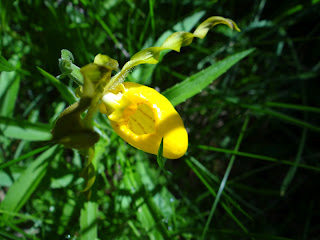 Oh, my gosh!  What a visually rich ad this one is!  It does put Obama's words into context...

Rep. Doc Hastings (R-Wash.), chairman of the House Natural Resources Committee, says this two-year funding mechanism for the Land and Water Conservation Fund (LWCF) is “particularly egregious” because the government doesn’t have billions of dollars needed to care for the vast holdings.


When a floating dock the size of a boxcar washed up on a sandy beach in Oregon, beachcombers got excited because it was the largest piece of debris from last year's tsunami in Japan to show up on the West Coast.
But scientists worried it represented a whole new way for invasive species of seaweed, crabs and other marine organisms to break the earth's natural barriers and further muck up the West Coast's marine environments. And more invasive species could be hitching rides on tsunami debris expected to arrive in the weeks and months to come.
"We know extinctions occur with invasions," said John Chapman, assistant professor of fisheries and invasive species specialist at Oregon State University's Hatfield Marine Science Center. "This is like arrows shot into the dark. Some of them could hit a mark." http://apnews.myway.com/article/20120609/D9V9RA7O2.html
---------------------------------------------------------------------------------------------
Intelligence chiefs have warned that plans to install smart energy meters in every house will leave families vulnerable to terrorist attacks.
According to the Government’s listening agency GCHQ, the plans will create a ‘strategic vulnerability’, giving foreign computer hackers the opportunity to target individual homes, municipal buildings and even whole districts.
Described by security experts as the ‘modern day equivalent of a nuclear strike’, hackers would be able to switch off meters from overseas, cutting off targets from the national grid.
Read more: http://www.dailymail.co.uk/news/article-2156648/Government-plans-install-smart-meters-homes-leave-open-cyber-attack.html#ixzz1xOIJ8Cj5


[I guess nobody likes pirates.] Iran and an American-led naval coalition each said today that they responded to a distress call by a US-flagged cargo ship that came under fire from gunmen in the Gulf of Oman a day earlier.
Armed guards aboard the 488-foot (148-meter) Maersk Texas thwarted the attack northeast of the Emirati port of Fujairah, Danish shipper A.P. Moller-Maersk said. The attack happened not far from the tense waters of the Strait of Hormuz, a key transit point for a fifth of the world's oil. US cargo ship saved from pirates by Iranian navy http://www.independent.co.uk/news/world/middle-east/us-cargo-ship-saved-from-pirates-by-iranian-navy-7785794.html