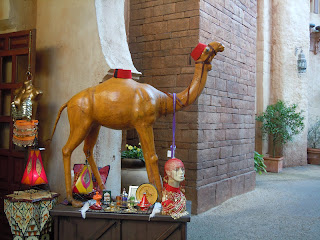 CNS News reports: On March 6, top officials from the Department of Homeland Security (DHS) told the House Homeland Security Subcommittee on Border and Maritime Security in both written and verbal testimony that DHS had arrested a Saudi national who was “threatening to blow up the White House and the Saudi Arabian Cultural Mission to the United States.”
A U.S. anti-terrorism law--18 U.S.C. 113B--says that a “person who, without lawful authority, uses, threatens, or attempts or conspires to use, a weapon of mass destruction … (3) against any property that is owned, leased or used by the United States or by any department or agency of the United States, whether the property is within or outside of the United States; or 4) against any property within the United States that is owned, leased, or used by a foreign government, shall be imprisoned for any term of years or for life, and if death results, shall be punished by death or imprisoned for any term of years or for life.”
In a written statement provided to CNSNews.com, Immigration and Customs Enforcement (ICE), the DHS division responsible for enforcing the immigration law inside U.S. territory, said it has had the Saudi national in custody since Jan. 10 and that he is undergoing deportation proceedings. The statement said that “federal and local authorities declined criminal prosecution.”
The March 6 congressional hearing at which the DHS officials said this Saudi national had threatened to blow up the White House was called to examine why the U.S. government had allowed Moroccan national Amine El Khalifi to live illegally in the United States for 13 years before he was arrested while allegedly attempting to commit a suicide bombing at the U.S. Capitol.   http://cnsnews.com/news/article/obama-administration-won-t-prosecute-saudi-it-claims-threatened-blow-white-house
-------------------------------------------------------------------------------------------------------------
Times 247 reports: Ken Livingstone has promised to turn London into a “beacon” for the words of the Prophet Mohammed in a sermon at one of the capital’s most controversial mosques.
Mr Livingstone, Labour’s candidate for mayor of London, pledged to “educate the mass of Londoners” in Islam, saying:  “That will help to cement our city as a beacon that demonstrates the meaning of the words of the Prophet.” Mr Livingstone described Mohammed’s words in his last sermon as “an agenda for all humanity.”
He praised the Prophet’s last sermon, telling his audience: “I want to spend the next four years making sure that every non-Muslim in London knows and understands [its] words and message.” He also promised to “make your life a bit easier financially.”

The President said he would block the entry of some imams invited to an Islamic conference next month, organised by the Union of French Islamic Organisations (UOIF).