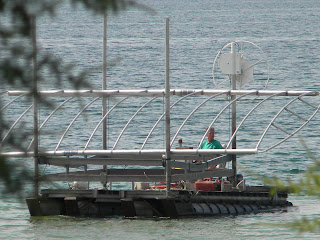 World Net Daily reports: In a speech in Colorado Springs, Obama said, "We cannot continue to rely only on our military in order to achieve the national security objectives we set. We've got have a civilian national security force that's just as powerful, just as strong, just as well-funded."
A study by the Rand Corp. within months of then-presidential candidate Barack Obama's call for a "national civilian security force" that would be as big and as well-funded as the half-trillion dollar U.S. military confirms that there are several ways to create the suggested "Stability Police Force" so that it legally could operate inside the U.S. borders.
One of the top recommendations in the report was that the capacity and management operations of the U.S. Marshals Service be beefed up and handed the assignment.
"Given that it is unlikely that MPs [Military Police] would be permitted to perform civilian policing tasks in the United States, the Marshals Service, despite its capacity and management shortfalls, is the agency best suited to take on the SPF mission under the assumptions of this study."


Glenn Beck reports: Another MSNBC Host humiliated by their guest:

According to infowars.com, who believe that the DHS chose white actors deliberately as a way to instil fear into American society, the department's own internal documents list predominantly white conservative groups as the most likely terrorists, such as 'Ron Paul supporters, gun owners, gold bullion enthusiasts, and a myriad of other comparatively banal political interests that are largely the domain of white middle class Americans'.
Read more: http://www.dailymail.co.uk/news/article-2017481/DHS-video-characterises-white-middle-class-Americans-likely-terrorists.html#ixzz1Sq43tNGR
Posted by Karen at 9:29 AM