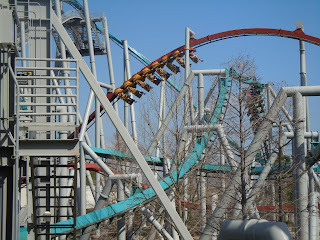 It's a roller-coaster ride!

As Examiner columnist and former U.S. Office of Personnel Management general counsel Hugh Hewitt wrote recently, "Forewarned is forearmed, and if the public is briefed again and again on the GOP's intention to keep the crucial parts of the government running, while allowing the shutdown of the EPA, the departments of education, labor and interior and various parts of health and human services (not Medicare, not the Centers for Disease Control and Prevention, not the Food and Drug Administration) the public will not only support the move, they will cheer it."
Read more at the Washington Examiner: http://washingtonexaminer.com/opinion/editorials/2011/02/examiner-editorial-gop-can-cut-spending-without-closing-government#ixzz1EhCes0zv
-------------------------------------------------------------------------------------------------------------
At the end of this column, you will find the source from which I am quoting, as usual.  The continuing resolution that passed the House just before dawn on Saturday was the final product of more than 60 hours worth of freewheeling, at times chaotic, debate on the House floor.
Here’s a list of some of these amendments (and the people who sponsored them):

Patriot Action Network opines: Claiming to be “sick” while protesting against the governor and Wisconsin taxpayers  and producing a false statement from a physician to receive sick pay for the time off, surely violates the teachers’ union contracts.   This could be grounds for dismissal.  Further, the doctors who are writing the false “medical permission” slips could be subject to professional misconduct under the state medical board rules.   It could also be that the physical/teacher collusion to defraud taxpayers of sick pay is a violation of state law.  Yet another doctor openly explained the scam to AOL News:

“Doctors from numerous hospitals set up a station near the Capitol to provide notes to explain public employees’ absences from work. Family physician Lou Sanner, 59, of Madison, said he had given out hundreds of notes. Many of the people he spoke with seemed to be suffering from stress, he said..”

American Thinker opines: I'm sure you'll be glad to hear that your tax dollars are being spent wisely by Michele Obama.