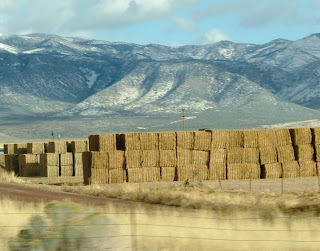 
[T]he United States is standing firm on its pledge to reduce its emissions 17 percent from 2005 levels by 2020 even without domestic legislation having passed, and would not endorse any deal in Cancun that did not embody the fundamental political agreement forged last year. http://www.conservativeblog.org/amyridenour/2010/11/29/us-special-envoy-promising-co2-emissions-cuts-even-without-d.html?utm_source=feedburner&utm_medium=feed&utm_campaign=Feed%3A+nationalcenter%2Fblog+%28Amy+Ridenour%27s+National+Center

American Thinker writes: An article from Science magazine published in September makes the case that human activity is causing the mass extinction of ocean life. "The current global crisis may therefore permanently alter the biosphere's taxonomic composition by changing the rules of evolution."  ...........
[While admitting that "mass extinction has occurred before in geological history", that species have arisen and then become extinct, Jeffrey Folks, the author of this article believes:
"the idea that human activity should be radically curtailed in a vain attempt to halt natural fluctuations in climate or sea life is worse than absurd: it is an irrational form of extremism that serves as the justification for an all-out assault on human liberty."
For the environmental faithful, however, there is a simple solution to the purported damage that humans do to the environment. It is the same solution environmentalists have been hawking for fifty years, ever since the publication of Rachel Carson's Silent Spring. Stop using pesticides, chemical fertilizers, and genetically altered seeds. Stop mining and logging. Stop drilling for oil and gas. Stop manufacturing cars, and stop building suburban homes. Stop consuming meat and dairy products, and stop producing so many flatscreen televisions and everything else that comes out of a factory. And stop having children. Just stop. Stop and stare wistfully off into the pleasant green countryside. Stop and relish your single bowl of rice and locally grown turnip. Huddle there in your damp, chilly cave, warm yourself with your hand-woven linen, and bask in the knowledge that when your brief existence draws to a close, you will have had no impact whatsoever on the earth or its millions of species.
In the absence of such fear, [he writes], vast government agencies would have no justification for existing, hedge funds trading carbon credits would collapse, and generous ethanol, biofuel, wind, and solar subsidies would be withdrawn.
Fortunately for the environmental profiteers, there always seems to be a new scientific theory -- itself generously subsidized by taxpayer money (as is Alroy's research, which is funded in part by the National Science Foundation) -- confirming the need for these parasitical institutions. Now that the theory of man-made global warming has been unmasked as the fraud that it is, get ready for the next-generation justifications for global environmental control. Mass extinction is probably as good a candidate as any. http://www.americanthinker.com/2010/12/apocalypse_now_or_pretty_soon.html
-------------------------------------------------------------------------------------------------------------
The Register reveals: A group of top NASA boffins says that current climate models predicting global warming are far too gloomy, and have failed to properly account for an important cooling factor which will come into play as CO2 levels rise.
According to Lahouari Bounoua of NASA's Goddard Space Flight Center, and other scientists from NASA and the US National Oceanic and Atmospheric Administration (NOAA), existing models fail to accurately include the effects of rising CO2 levels on green plants. As green plants breathe in CO2 in the process of photosynthesis – they also release oxygen, the only reason that there is any in the air for us to breathe – more carbon dioxide has important effects on them.
The NASA and NOAA boffins used their more accurate science to model a world where CO2 levels have doubled to 780 parts per million (ppm) compared to today's 390-odd. They say that world would actually warm up by just 1.64°C overall, and the vegetation-cooling effect would be stronger over land to boot – thus temperatures on land would would be a further 0.3°C cooler compared to the present sims.
International diplomatic efforts under UN auspices are currently devoted to keeping global warming limited to 2°C or less, http://www.theregister.co.uk/2010/12/08/new_model_doubled_co2_sub_2_degrees_warming/