Charles Wrangel; Al Gore and Ethanol; TSA and Organized Chaos; Stripping to Undies for TSA; Fondling by TSA; How to Fix It 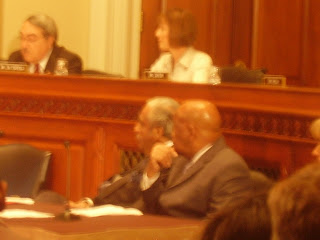 One of the reasons I made that mistake is that I paid particular attention to the farmers in my home state of Tennessee, and I had a certain fondness for the farmers in the state of Iowa because I was about to run for president." [Nothing political here, and no personal gain thru the now defunct Chicago Energy Exchanges either.]  http://af.reuters.com/article/energyOilNews/idAFLDE6AL0YT20101122?pageNumber=2&virtualBrandChannel=0
------------------------------------------------------------------------------------------------------------
Canada Free Press writes: “At the same time that the federal government is mandating the physical and constitutional violation of air travelers at our airports, they are prohibiting law enforcement officers in Arizona from asking for proof of identity and citizenship from those they suspect as being illegal aliens for ‘constitutional’ concerns.” – Doug Hagmann
“They” could not have planned it any better, initiating enhanced screening procedures right before the busiest travel time of the year. Our visceral reaction, outrage and chants of “don’t touch my junk” are understandable and warranted, but tend to overshadow our visibility of what’s really taking place, which is vastly more than meets the eye.
The American people are being carefully and deliberately conditioned to accept the stripping away of our Constitutional rights, a process in the making for nearly a century. To see how far this conditioning has progressed, just look at how many people are willing to be groped, fondled, nuked, and subjected to other forms of degrading tactics by agents of the federal government for the mere illusion of security. They reason that if it will make air travel safer to have their genitalia fondled, that it is a “necessary evil.” Well, they are only half correct; it is indeed evil, but not necessary.
It would be a mistake to believe that this administration is merely mishandling the current throw-down between the TSA and airline passengers at the boarding gate. It is not being mishandled, but carefully crafted into organized chaos designed to elicit social unrest, [ala Saul Alinsky's Rules for Radicals.] Anyone refusing to comply with the increasingly oppressive federal rules will be considered domestic terrorists, much like we’ve seen with individuals and groups concerned with our Constitution, second amendment rights, and pro-life causes.


It begins through conditioning, involves nationalization, and relies heavily on the conditioning and on the malaise of the people. http://canadafreepress.com/index.php/article/30235