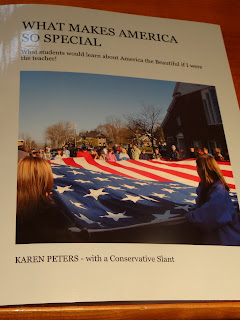 My book is a simple but hard-hitting, 26 page booklet.

The following subjects are covered along with many photos: our Representative Republic, the three branches of government, the Bill of Rights, The Emancipation Proclamation and Republican efforts to end slavery and pass the Civil Rights Act, WWII and the Holocaust, American inventions, Obamacare and the Supreme Court decision, Common Core, UN Agenda 21, man made global warming and green energy, and basic Rules for Life. In short, it is what is good about America.  It is hard hitting, and not for those in elementary school.
Well, the book's title has been changed to I'm Proud to be an American, available for preview and purchase at http://www.blurb.com/b/4321763-i-m-proud-to-be-an-american

Here is part of just one page in the book:
SOME THINGS ABOUT GLOBAL WARMING THAT YOU PROBABLY  WON'T LEARN IN SCHOOL

1) Many scientists realize that Planet Earth has had many Ice Ages and Global Warming, every 10,000 years, during its 4.5 billion years of existence.  Since we have not been keeping track of weather for billions of years,  we cannot really say that what is happening now is anything new.  The scientists "fixed" their data by starting their study just when the Earth was finished with the last cold spell and was starting to warm up again.  The way a computer program is set up helps to get the results desired.  Man was not alive when the first global warming occurred, so he did not cause the global warming in the past, and may contribute very little to it now.   "You can't fool Mother Nature", meaning that warm and icy cycles are normal.  That's Mother Earth for you!  So don't be scared by what you might learn at school about it being all our fault.
2) These environmental laws might destroy our economy.
3) Windmills don't work when the wind stops, they kill many birds, they make people living nearby sick, they heat the ground and they create more greenhouse gases than they save.
4) Those fancy new lightbulbs that we are encouraged and forced to buy are actually dangerous.  You must stay 2-3 feet away from the bulb because being closer may damage your skin!  They contain mercury, so if a bulb breaks we must get out of the room in a hurry and have an expert come to clean it up, because mercury is dangerous.  Just think how these burned out bulbs will harm our landfills.
5) Electric cars can only go 40 miles, and they pollute the Earth more while they are being produced than a gasoline-run car will during its lifetime.  The energy used to recharge the car adds more pollutants to our air than just driving a normal car.
6) An Ice Age may have actually begun.  Shhh!  Those who make money and tax you because of of Global Warming don't want you to know!
7) Ethanol is made of corn and soy beans.  Making us use Ethanol in our cars reduces the amount of corn we have to feed humans. Others in this World accuse us of starving their citizens because they now do not have enough food.  Destroying grasslands to plant more corn and soybeans destroys key breeding grounds for ducks and other wildlife and also puts more carbon into the air.  Massive amounts of water are used in the making of ethanol.
8) Government has mandated low-flow shower heads, and low water use by our toilets.  This causes us to take longer showers and to flush twice.
9) America has the largest reserves of gas and oil in the world.  Our President won't allow us to go get it.  So we buy our oil from our enemies, making them richer.
10) Surprise!  There are far more polar bears in Alaska now.  They just moved to a different location.  And the moose in Alaska love to hang out near the Alaska Pipeline, because it is a little warmer there.
11) Scientists have a reason to promote Manmade Global Warming, for they get millions of dollars in research funds to study it.  Nay-sayers get none.
12) In 2002, a room of the Smithsonian displayed one entire wall charting the cooling of our globe over the last 60 million years.  Science magazine in 1975 predicted  "a full-blown, 10,000 year ice age".
13) Stoking panic about warming helps get some politicians reelected.
14) Greenland, which might be warming a bit now, was once green!  Our planet MAY have a temperature increase of  .1%, if that.
15) China pollutes the planet so much that what little we can do makes almost no difference.
16) The scientific community manipulated data and destroyed evidence in order to "prove" themselves right, and this was dubbed the Climategate scandal.  Learn about it.
17) 30,000 scientists are considering suing Al Gore for fraud
18) An England high court  found 9 key scientific errors in Al Gore's movie An Inconvenient Truth, and won't allow it to be shown in their schools without that fact being presented.  http://www.telegraph.co.uk/earth/earthnews/3310137/Al-Gores-nine-Inconvenient-Untruths.html
19) The Global Warming Policy Foundation recently wrote: ‘We could be in for a cooling period that lasts 200-250 years. The period of low solar activity could start in 2030-2040.’

Other than all this, you can believe everything you are taught....
Ask what caused the Earth to heat up and to cool down through the millenia when man was not here to make it happen.  Ask how animals have evolved in order to survive change.  Do question what you are taught in school, always!  Do your own research!
----------------------------

Attorney General Eric Holder signed off on a controversial search warrant that identified Fox News reporter James Rosen as a “possible co-conspirator” in violations of the Espionage Act and authorized seizure of his private emails, a law enforcement official told NBC News on Thursday.

I am troubled by the possibility that leak investigations may chill the investigative journalism that holds government accountable," Obama said. "Journalists should not be at legal risk for doing their jobs."  [Now that's a good one, Barack!  A LEADER would have told his minions to follow the law, and would have actually overseen the work ethics of the DOJ.]  http://openchannel.nbcnews.com/_news/2013/05/23/18451142-holder-okd-search-warrant-for-fox-news-reporters-private-emails-official-says?lite
--------------------------

And then the news: “I have raised these issues with the attorney general, who shares my concern. So he has agreed to review existing Department of Justice guidelines governing investigations that involve reporters, and will convene a group of media organizations to hear their concerns as part of that review. And I have directed the attorney general to report back to me by July 12th.”  [So now the man who did the dirty deed and lied about that fact to Congress is going to investigate himself.  That ought to work well.  And its par for the course.] http://abcnews.go.com/blogs/politics/2013/05/obama-orders-doj-review-of-leak-investigations/
-------------------------

“Look, I know a lot of you think I’m really busy and you don’t want to bother me,” the President reportedly told his staff in an Oval Office meeting. “But cc me anyway. It’s good for me to keep up on what’s going on around here.”
“It’s not good when I turn on the news and they’re talking about something at the White House and I’m like, whoa, when did that happen?” Mr. Obama added. “I think cc’ing me would go a long way toward fixing that.”
“Maybe put a Post-It note on your computer saying, ‘CC POTUS,’ so you don’t forget,” he said as the meeting broke up. http://www.newyorker.com/online/blogs/borowitzreport/2013/05/obama-asks-staff-to-start-ccing-him-on-stuff.html
--------------------------

“Why was the culture such under your watch that an employee felt comfortable targeting conservative groups?” Gowdy [continued asking Shulman]: “Did you investigate that?”
“From my reading of the report, um, I can’t tell if it was political motivation or if it was tone-deaf, somebody trying to expedite a way –” Shulman [of the IRS] started.
“You still don’t know that this was political?”
“Excuse me?”
“You still don’t know that this was political?”
“I defer to the inspector general.”
“Well, I’ll tell you this, Mister Shulman, your predecessor said that he wasn’t sure if it was partisan and that requires the listener to be as stupid as the speaker.” http://www.theblaze.com/stories/2013/05/22/the-tense-exchange-between-rep-trey-gowdy-and-the-former-irs-head-youve-been-waiting-for-and-it-doesnt-disappoint/
-------------------------

-----------------
The IRS scandal provides Republicans and conservatives with the opportunity to repeal and replace Obamacare now. The House Republican majority should refuse to fund the expansion of the IRS necessary to manage Obamacare. Without that funding, and hiring thousands of additional agents, the IRS cannot even begin to manage Obamacare.
President Obama may throw a fit. He may refuse to sign funding bills to keep the federal government open. No matter. Let him close his government down if he wants. Nobody wants the IRS playing political games with their health care and health records, like it did with the constitutional rights to freedom of speech and Equal Protection of Tea Party and conservative organizations. Contribute to the Republican Party? Attend a Tea Party protest? Good luck getting your Obamacare health insurance tax credit application approved. Good luck finding a doctor the government will pay to do that operation your kid needs. http://spectator.org/archives/2013/05/22/time-to-go-for-the-kill
-----------------------------

If you know of an organization that believes it has been targeted by the I.R.S, please forward that information and all supporting material to my office in care of my Director of Public Affairs, Rusty Hills, at hillsr@michigan.gov so that we can provide this information to U.S. Representative Dave Camp, Chair of the House Ways and Means Committee, for his review.
Sincerely,
Bill Schuette Attorney General, Michigan
----------------------------
Tennessee Republican U.S. Sen. Lamar Alexander said today that Health and Human Services Secretary Kathleen Sebelius may be breaking federal law by raising private [funds] to help implement the federal health care law and compared her actions to the Iran-Contra scandal.  http://www.timesfreepress.com/news/2013/may/11/sebelius-fundraising-obamacare-may-be-illegal-alex/
----------------------------------------

Labor unions are breaking with President Obama on ObamaCare.
Months after the president’s reelection, a variety of unions are publicly balking at how the administration plans to implement the landmark law. They warn that unless there are changes, the results could be catastrophic.
Read more: http://thehill.com/business-a-lobbying/300881-labor-unions-break-ranks-on-health-law#ixzz2Tvgh5LGj -----------------------------------

Colorado Undersheriff: DHS told police to monitor “people who take The Bible literally”  http://www.glennbeck.com/2013/04/12/colorado-undersheriff-dhs-told-police-to-monitor-people-who-take-the-bible-literally/
---------------------------
Yusuf Ibrahim, a Muslim man, targeted and murdered two Coptic Egyptian Christian men who lived and worked in New Jersey. He beheaded them and cut off their hands. [What?  YOu mean you have heard nothing about this?  You thought the LOndon beheading was the first?] http://www.westernjournalism.com/muslim-beheads-christians-in-nj-mainstream-media-silent/
------------------------------

When Saudi Arabia announced three months ago that girls as young as 10-years old would now be allowed to marry, Iran decided to drop the age limit even further.
Iranian Christian news service Mohabat News reports a member of the Iranian Parliament (Majiles) Mohammad Ali Isfenani, "we must regard 9 as being the appropriate age for a girl to have reached puberty and qualified to get married. To do otherwise would be to contradict and challenge Islamic Sharia law."
Read more: http://www.digitaljournal.com/article/329317#ixzz2Tf4u13o8
======================

A new survey reveals the dramatically changing face of religion in America, with the number of Muslims in the U.S. soaring 67% in the decade since the 9/11 attacks.
Data released Tuesday from the 2010 U.S. Religion Census shows Islam was the fastest growing religion in America in the last 10 years, with 2.6 million living in the U.S. today, up from 1 million in 2000.
Mormonism too saw remarkable growth, with a 45% increase in adherents. It added nearly 2 million members since 2000, bringing their number in the U.S. to 6.1 million.
Read more: http://www.nydailynews.com/news/national/number-muslims-u-s-doubles-9-11-article-1.1071895#ixzz2Tg6QAAdf
------------------------