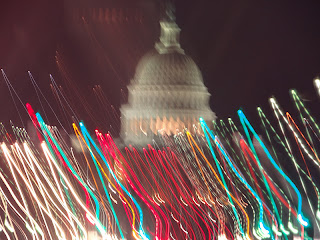 
Between chants, cheers and applause, organizers warned those at the training to be prepared for insults and obstruction Tuesday in Lansing. The volunteers lined up on opposite sides of a long hall at UAW Local 600 in suburban Detroit and took turn turns portraying protesters and union critics.
“Humanize the situation. Be clear with your intentions. Introduce yourself,” national labor activist Lisa Fithian, of Austin, Texas, said through a megaphone. “They’re going to do everything they can to criminalize us.”

PSY owes his popularity to his Korean pop hit taking hold among tens of millions of American fans.
However, countless fans were offended by the lyrics from an anti-American protest song he sang that included the lines, '‘kill those f****** Yankees who have been torturing Iraqi captives…kill them all slowly and painfully.'

Instead, he was personally greeted by the president on Sunday night.

When President Obama first warned Syria’s leader, President Bashar al-Assad, that even making moves toward using chemical weapons would cross a “red line” that might force the United States to drop its reluctance to intervene in the country’s civil war, Mr. Obama took an expansive view of where he drew that boundary.
“We cannot have a situation where chemical or biological weapons are falling into the hands of the wrong people,” he said at an Aug. 20 news conference. He added: “A red line for us is we start seeing a whole bunch of chemical weapons moving around or being utilized. That would change my calculus.”

Footprints on the Sand of Time

Education's Great Divide: My Time in the Trenches

Six weeks after Sandy hit the New Jersey and New York coast, residents are still struggling and in desperate need of shelter. Many hard-hit victims are not getting help despite President Barack Obama’s pledge of the full support of the federal government, and they are dealing with red tape the president saidwould not be tolerated.

Food stamp use reaches another high in September: 47.7 million participants