I now write for Examiner.com/Traverse City, which you can follow at http://www.examiner.com/conservative-69-in-traverse-city/karen-peters.  Following is my latest column.

In Wisconsin, as well as in the U.S. House of Representatives, conservative majorities seem to be enraging those liberals and progressives who have recently lost their power in some houses of government.  Truth be told, as Gallup poling showed in 2010, "Conservatives have maintained their leading position among U.S. ideological groups in the first half of 2010. Gallup finds 42% of Americans describing themselves as either very conservative or conservative, and that contrasts with the 20% calling themselves liberal or very liberal."  It becomes clear that progressives think it is fine for the minority to rule the majority in America.  That is obvious with the passage of Obamacare, for instance, where no simple vote carried the day without the doling out of outrageous incentives or bribes.  http://www.gallup.com/poll/141032/2010-conservatives-outnumber-moderates-liberals.aspx

While our President continues to espouse that race is a key component of the Tea Party, we are witnessing the thuggery of the bused-in union members in Wisconsin who join the teachers who are shirking their duties in the classrooms.  Hateful, demeaning signs and comments are rife, intimidating confrontations with Republican lawmakers have occurred, and a refusal to leave the Capitol in order for it to be cleaned is a problem.  Now we learn that $7.5 million dollars of damage has been done to the floors and walls of the Capitol by those teachers who "peacefully" demonstrate, leaving Wisconsin's taxpayers with the bill.  As those in the unions leave their jobs and responsibilities in order to support their rights to take from American taxpayers not only their salaries but their pensions, healthcare and other perks, elected Democrat Senators face possible fines and arrests for abandoning their duty to show up for work to do the jobs for which they were elected, causing some to ponder Recall Petitions.

It has been suggested that outside groups have been paying for those Senators' bills while they are holed up in an out-of-state motel, bringing into question the ethics or right of such action.  The Wisconsin Government Accountability Board has declared that only "since [Governor] Walker accused Democrats of using their self-imposed exile to raise campaign contributions, then that exile is in fact campaign-related and Democrats may use campaign funds to finance it."  Those Senators who might face recall petitions will no longer be limited by the amount of campaign donations they are allowed to accept for the purpose of defending themselves against those recalls, even though they only face those recalls because they fled.
Following a demonstration at the Capitol by the ever-present Jesse Jackson, and an opening day speech by him, teachers are back in the classrooms following a full week of cancelled classes.  It remains to be seen if those teachers will lose pay or sick days for the days they denied their students an education while fraudulently claiming to be sick.  Will doctors be disciplined for handing out "sick passes" without examinations? Will school be extended by one week this spring to meet state guidelines?  Will teachers discuss the politics of all this in their classrooms, or will they simply teach the methods of rebellion which they employed?  If they discuss this at all, we should moniutor if both sides of the argument are being presented.
Read other columns at http://www.examiner.com/conservative-69-in-traverse-city/karen-peters
-------------------------------------------------------------------------------------------------------------
From Politico: The Obama administration late Friday appealed a judge's orders directing the Interior Department to act on several Gulf of Mexico deepwater drilling permits.
The appeal is the latest salvo in the ongoing fight over the speed with which Interior is – or isn't – letting oil drillers get back to work after last year's BP oil spill. The judge in this particular case in my view is wrong," Salazar said. “And we will argue the case because I don’t believe that the court has the jurisdiction to basically tell the Department of Interior what my administrative responsibilities are.”
He added, “the policy we have in mind is unmistakingly clear: We are moving forward with the development of oil and gas” production."
Earlier in February, the judge held Interior in contempt, citing "dismissive conduct" by blocking offshore drilling during last year's spill. 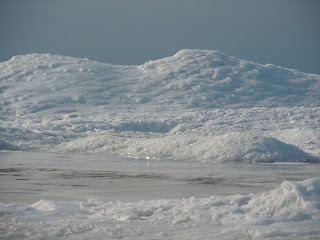 The Washington Examiner opines: Department of the Interior Secretary Salazar, a former U.S. senator from Colorado well practiced in Washington's pretended niceties, wields power with self-assured arrogance that needs no bluster. Two days before Christmas last year, he issued Secretarial Order 3310, in which through bureaucratic fiat he created a new category of off-limits federal property that he calls "Wild Lands."
House Natural Resources Committee Chairman Rep. Doc Hastings, R-Wash., held a hearing last week to criticize Salazar's end-run around congressional authorization and the Wild Lands order's adverse impact on jobs and economic growth. Hastings was clearly furious, ending his opening statement with, "This administration should be on notice that unilateral decisions and orders to impose restrictive, job-destroying policies will be met with firm resistance."
Salazar told Bob Abbey, his director of the Bureau of Land Management, to get in that hearing and defend his order's legality. Big mistake. Hastings allowed Abbey to testify after the other nine witnesses were finished and proceeded to rip his testimony apart, with devastating cross-examination from Republican Reps. Rob Bishop, R-Utah, and Don Young, R-Alaska. Hastings ended by forcing Abbey to admit that Salazar had "no statutory authority" to issue Order 3310.
Never mind that the Congressional Research Service has released a study, U.S. Fossil Fuel Resources, that shows America's combined recoverable natural gas, oil, and coal endowment is the largest on Earth, far larger than that of Saudi Arabia (3rd), China (4th), and Canada (6th) combined.
None of that matters to the Obama administration, which has blocked dozens of energy developments on federal lands and now forbids recovery of 83 percent of our oil resources.
There are as many rationalizations for this vandalism to America's capacity to do work as there are blocked areas, which include a U.S. Fish and Wildlife Service proposal to designate a resource-rich area of 200,000 square miles as untouchable "critical habitat" for polar bears.