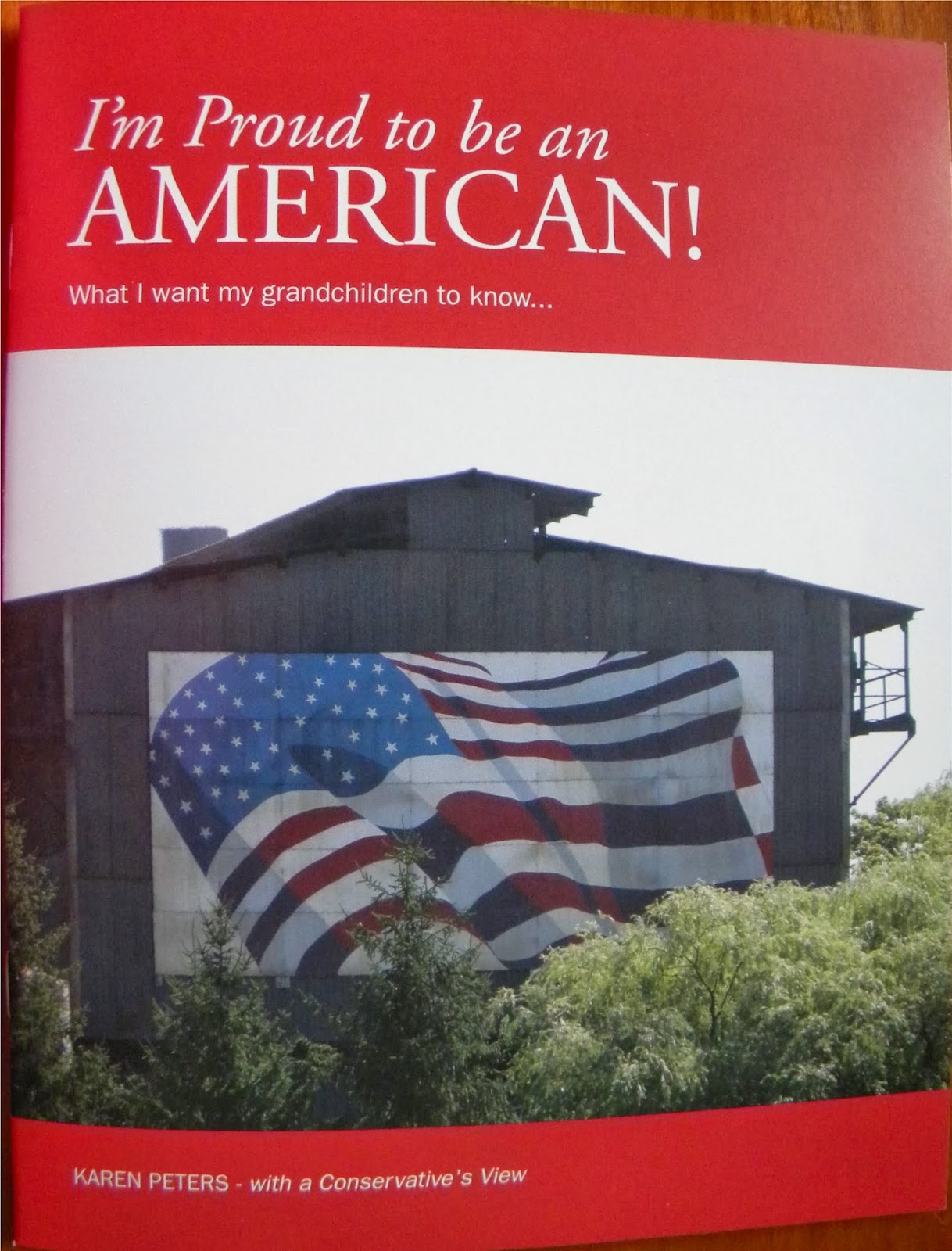 Be the first to get a copy of I'm Proud to be an American - what I want my grandchildren to know, written by Karen Peters, the owner of this website.

From an introduction to some of our national monuments in Washington, D.C., to the explanation of the successes of our Representative Republic and of capitalism, this book gives readers many reasons to be proud to be an American.  Alternative systems of government are exposed for the disastrous results they have produced. The various strategies of Progressives to change America forever are described.  The flaws of each green energy solution and the questions about global warming’s causes are presented.  The actions that would lead to America’s Suicide are discussed.  A description of American Exceptionalism will have you cheering once again for America.

It is $8 and available HERE   https://www.paypal.com/cgi-bin/webscr?cmd=_s-xclick&hosted_button_id=9MNYFJBZKU2DQE

Raises major questions about what U.S. was doing in secretive facility

Read more at http://www.wnd.com/2014/01/bombshell-pentagon-didnt-know-benghazi-annex-existed/#RGzV3goil8ZkuWOQ.99
---------------------[President George W. Bush vindicated!]The WikiLeaks de facto declassification of privileged material makes it case closed: Saddam Hussein possessed weapons of mass destruction -- and intended to restart his program once the heat was off. [We did give him more than 3 months of warnings that we were about to go into Iraq, sufficient time to move the weapons to Syria.] http://townhall.com/columnists/larryelder/2010/12  /09/the_wikileaks_vindication_of_george_w_bush
---------------


Much has been reported about the chemical spill in West Virginia and the adverse impact upon the drinking water for local communities. However, could there be even greater – and purposeful — threats to drinking water here in America, which is going unreported and ignored?  [He goes on to list several unsettling and very suspicious events which have been dismissed without action.]
Read more at http://allenbwest.com/2014/01/terror-threat-water-supply/#cZx7f84OITgUePLt.99
-----------

Worse than Richard Nixon. An unprecedented abuse of powers. The most un-American president in the nation’s history.
Nat Hentoff does not think much of President Obama.
And now, the famous journalist says it is time to begin looking into impeachment.
Hentoff sees the biggest problem as Obama’s penchant to rule by executive order when he can’t convince Congress to do things his way.

“Apparently he doesn’t give one damn about the separation of powers,” Hentoff told WND. “Never before in our history has a president done these things.”

Recognized as one of the foremost authorities on the Bill of Rights and the Supreme Court, Hentoff was a columnist and staff writer with The Village Voice for 51 years, from 1957 until 2008, when his columns began appearing in WND.
Read more at http://www.wnd.com/2014/01/liberal-icon-urges-obama-impeachment/#zD2tuHh3eefZs1Wb.99

[Here is your warning: while it is important to know what is going on, this is very graphic, and being presented to children!]

Questions on the “Are you a slut?” test include:


When closely examined, however, the initiatives are embedded with plans for major fundamental changes.  Well-known recent examples include the Common Core, the Affordable Care Act, and Agenda 21.
One such initiative with the hidden potential for sweeping transformation is the "internationalization" of higher education.  It is a diffuse movement advanced by numerous groups and individuals throughout academia, from independent centers to professional associations to college faculty and administrators.  Despite an innocent façade, its declared intention provides cover for a highly aggressive campaign of multiculturalism, "global citizenship," redistributive economics, and anti-Western attitudes.
One organization attempting to take the lead is the Association of International Education Administrators (AEIA).  http://www.americanthinker.com/2014/01/global_citizens_of_the_world_obey.htmlhttp://
----------------

Schools across the country are rethinking “zero tolerance” discipline policies under which children have been suspended, even arrested, for minor offenses like cursing, getting into shoving matches and other garden-variety misbehavior that in years past would have been resolved with detention or meetings with a child’s parents.  http://www.nytimes.com/2014/01/06/opinion/zero-tolerance-reconsidered.html?hp&rref=opinion&_r=1&#comments
-----------------
The Stanford University study found that charter public schools had significantly more "economically disadvantaged" students than traditional public schools.

Dev Davis, research manager at CREDO at Stanford University, said they found that 70 percent of the charter students were economically disadvantaged, meaning they were eligible for free or reduced price meals. She said 55 percent of the traditional public school students were economically disadvantaged.
Also, the Stanford study found that black and Hispanic students did "significantly" better in reading and math when in charter schools than their peers in conventional public schools.  http://www.michigancapitolconfidential.com/19477
----------------Popular television and radio host Sean Hannity delivered a hard hitting response to Democratic New York Gov. Andrew Cuomo’s claim that if “extreme conservatives” are “right-to-life, pro-assault-weapon, anti-gay,” then “they have no place in the state of New York, because that’s not who New Yorkers are.”
Pledging to eventually vacate the state, Hannity delivered a pointed message on his radio show Monday, saying, “Gov. Cuomo, I’m going to leave and I’m taking all of my money with me — every single solitary penny.”

Hannity went on to remind the governor that there are numerous employees who work for his radio and television programs and that these individuals will be out of a job if he decides to move out of the state.       From The Blaze.com
----------------------
American influence in the Middle East will dwindle to Iran's benefit if the United States responds to the Arab Spring upheaval by pulling government aid, the Obama administration's top diplomat for the region told Congress Wednesday.
Instead, Assistant Secretary of State for Near Eastern Affairs Jeffrey Feltman testified that lawmakers should approve the administration's request to create a $770 million incentive fund to support democratic and free-market reforms in the region. The fund would address the root causes of the upheaval, Feltman said, while “lack of these reforms will continue to undermine our interests across the board.”  Read more: http://thehill.com/blogs/global-affairs/middle-east-north-africa/226527-state-department-urges-congress-to-continue-pouring-money-into-arab-countries#ixzz2r3er2Na3
----------------------------


Mexican couple arrested crossing into the US in connection with Target credit card breach which affected 100million customers  http://www.dailymail.co.uk/news/article-2542977/Mexican-couple-arrested-crossing-U-S-connection-Target-cedit-car-breach-affected-100million-customers.html

Why is the EPA altering state boundaries in Wyoming - and reversing over 100 years of established law?  Well, apparently the city of Riverton now falls under the jurisdiction of the Wind River Indian Reservation.  This, obviously, isn't sitting well with the governor's office - which is urging the EPA to reconsider its ruling and respect the rule of law.
Reacting to the decision to reduce the size of Wyoming by about a million acres, Wyoming Governor Matt Mead warned of the dangers to all Americans of this type of unilateral land redistribution by the EPA:
- See more at: http://www.cnsnews.com/mrctv-blog/matt-vespa/epa-decree-shrinks-size-wyoming-million-acres#sthash.E7xcWxe6.GV51MzPX.dpuf
-----------------

Despite the drumbeat of news stories claiming that every storm is evidence of global warming, demanding immediate action, global storm activity is at historic lows, and sea level rises are miniscule. And it's not like Boston has never experienced a nor'easter.
That $40 million for solar batteries (the price of 40,000 gasoline generators) smells like a payoff to the solar lobby.
As for the $10 million for seawall improvement, it might be money well spent -- an actual shovel-ready job
Read more: http://www.americanthinker.com/2014/01/warmists_pivot_to_climate_adaptation.html#ixzz2r86863A6
---------------------


Like the man said, he’s got a pen and a phone and he’s not going to wait around for the legislature just because the law says he has to.